Human Tropoelastin is the precursor to the elastin molecule. It is not normally available in its native state since it becomes cross-linked immediately after its synthesis by the cell, during its export into the extracellular matrix. Tropoelastin is produced using recombinant production methods.

Used as a cell culture surface coating, tropoelastin can promote cell attachment and spreading. Tropoelastin also allows the modulation of surface elasticity which can have significant effects on cell growth and function. 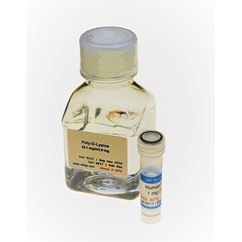