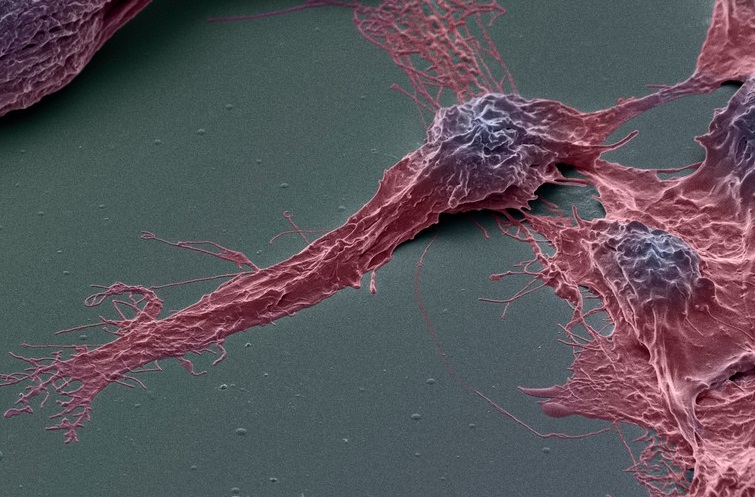 Exosomes are extracellular vesicles, about 30 – 150nm in diameter, formed via the inward budding of early endosomes. These early endosomes go on to form multi-vesicular bodies (MVBs) which later fuse with the cell’s outer membrane, releasing the contents (exosomes included) to the extracellular space. Exosomes differ from microvesicles which form via outward blebbing of the plasma membrane and are usually larger in diameter (100 – 1000nm).

Exosomes play an important role in both local and systemic cellular communication, carrying most types of biomolecules (including DNAs, RNAs, proteins and lipids) between cells and tissues. The properties of exosomes may allow us to utilize them for therapeutic and clinical purposes.

Both the contents and the surface protein expression profile of exosomes can provide an insight into the state of the exosome-producing cell. For this reason, exosomes can act as excellent biomarkers for disease. Exosomes are further suited to this role as they are present in all bodily fluids (including blood, urine, saliva and cerebral spinal fluid). This ubiquitous nature is allowing the development of diagnostic tests using minimally-invasive procedures, such as a blood or urine tests.

It has also been shown for many diseases that levels of exosomal biomarkers can directly correspond with the disease state. For example, many patients with metastatic melanoma have high levels of circulating Programmed Death Ligand 1 (PD-L1), a protein found at high levels on exosomes released by tumour cells. The levels of PD-L1 bound to exosomes in the blood directly correlates with the size of the tumour. This correlation enables the monitoring of disease progression over time. It also allows doctors to monitor patient response to treatment and even select groups of patients for specific treatments (or at least rule out certain treatments for non-responding patients).

Exosomal PD-L1 is also a target for therapy in metastatic melanoma. PD-L1 binds to its receptor PD-1 (Programmed Cell Death-1) present on tumour infiltrating T cells thereby suppressing their anti-tumour activity. Using an antibody to block this interaction can release T-cells from tumour control and is effective for treating cancer, although patient response rates are low. Interestingly, throughout the course of anti-PD-1 therapy, there are changes to the levels of circulating exosomal PD-L1. This makes sense, as the PD-L1 secreting tumour cells no longer have a growth advantage over other cancer cells within the tumor microenvironment and are therefore selected against by the treatment. It has been found that patients who exhibit a high fold-change in circulating exosomal PD-L1 respond better to the anti-PD-1 treatment.

Exosomes may be particularly useful for detecting diseases developing deep in the brain because, unlike other potential marker proteins, exosomes originating here are able to cross the blood-brain barrier to reach peripheral blood, allowing the development of a blood-based test for the diagnosis of brain disorders.

The ability of exosomes to cross the blood-brain barrier is also significant in the use of exosomes as drug delivery vehicles allowing them to carry therapeutic agents into the brain. Exosomes possess many features that further suggest utility for this application: these include low toxicity, low immunogenicity, the ability to maintain their size and structure over extended periods (a long half-life), as well as the ability to maintain the bioactivity of therapeutic agents they carry.

Researchers are particularly interested in exosomes as carriers for RNA therapeutics. RNA-based drugs require a delivery system to protect them from plasma-borne endonucleases and enable transport across the target cell’s plasma membrane. As natural carriers of RNA, exosomes have significant potential as delivery vehicles for synthetic RNA. This potential has been demonstrated elegantly in a recently reported mouse-model study which explored the use of exosomes to prevent metastasis occurring in triple-negative breast cancer. Prior to metastasis occurring, a pre-metastatic niche develops in a secondary organ. This is an environment that is conducive to tumor growth. The aim of this study was to deliver siRNA to a pre-metastatic niche using exosome carriers, to prevent the establishment of cancer cells in the new location. Exosomes with an affinity for lung tissue were chosen in this case. The siRNA was targeted to the S100A4 gene for downregulation of the associated calcium-binding protein, and has been implicated in metastasis and tumour progression. The exosomes delivered the siRNA, without degradation, and the treatment effectively prevented tumor cell growth in the lung.

Despite the promise shown by exosomes for use as drug delivery systems, their lack of cell/tissue-specific targeting has proven to be a limitation in many cases. Exosome engineering techniques are being developed to overcome this issue by displaying targeting proteins on the surface of exosomes. This can be achieved by expressing fusion proteins in exosome-producing cell lines. The fusion proteins need to combine a targeting protein with an exosomal membrane protein. For example, Lamp2b (a membrane protein) fused with Rabies Viral Glycoprotein (RVG, a protein that specifically targets neurons). When systemically delivered to mice, exosomes expressing Lamp2b-RVG were successfully shown to accumulate in their neurons.

Although this is still early days for exosome therapy with much more work to be done regarding the long-term effects of exosome delivery, as well as large-scale isolation and targetability, it is clear that a wide range of applications are emerging for exosomes in biomedicine.

For more information on exosome isolation and characterization, as well as relevant products, please see https://www.cellgs.com/items/exosomes.html