Home Blog The difference between peptides and proteins 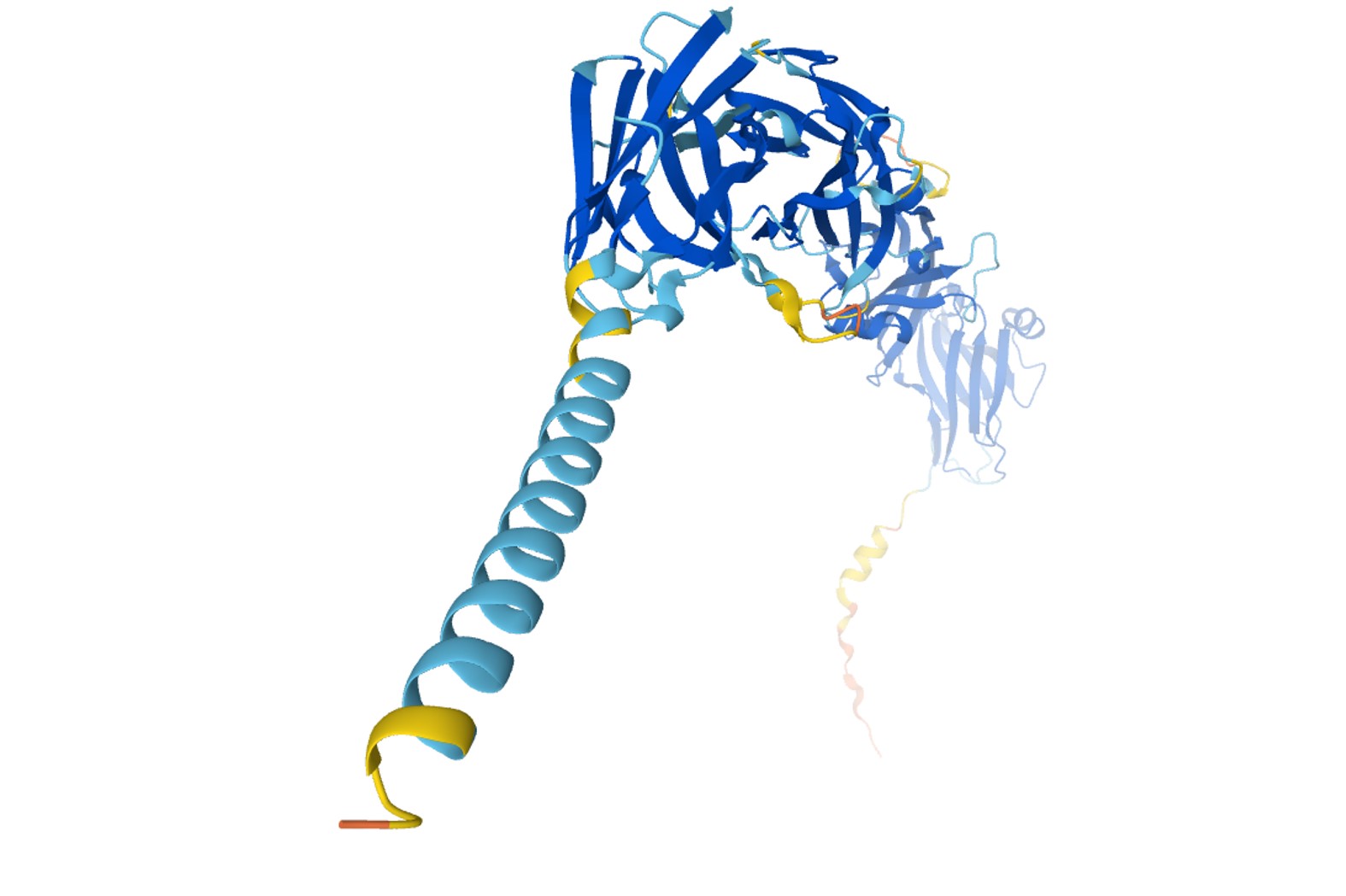 The distinction between peptides vs. proteins is not always apparent, but it is important to understand. Peptides and proteins are, indeed, fundamentally the same, each being composed of amino acids held together by peptide bonds. However, fundamental differences between proteins and peptides go beyond an arbitrary length threshold. Look closer and they differ in structure, function, and therapeutic use.

Proteins are at least 50, and usually more than 100, amino acids in length and composed of multiple peptide subunits.  Proteins have four levels of structure, which include primary (sequence of amino acids), secondary (structures such as alpha helices and beta sheets), tertiary (3-dimensional structure determined by interactions among amino acid side chains), and quaternary (complexes of multiple protein subunits).

A peptide is a short chain of amino acids, typically between two and 50 amino acids in length.  Peptide structure is less complex.  Based on the amino acid composition, both proteins and peptides can have hydrophobic and hydrophilic regions.  The structure of a protein contributes to its function. Modifications to structure can be effected by the activity of other proteins, such as protein kinases causing phosphorylation after a protein has formed into its tertiary shape. These modifications can be reversed to toggle the protein between active and inactive forms. Peptides can be given some of the secondary structure of proteins by the use of chemical scaffolds to constrain their structure. This expands the capabilities of peptides as drugs. 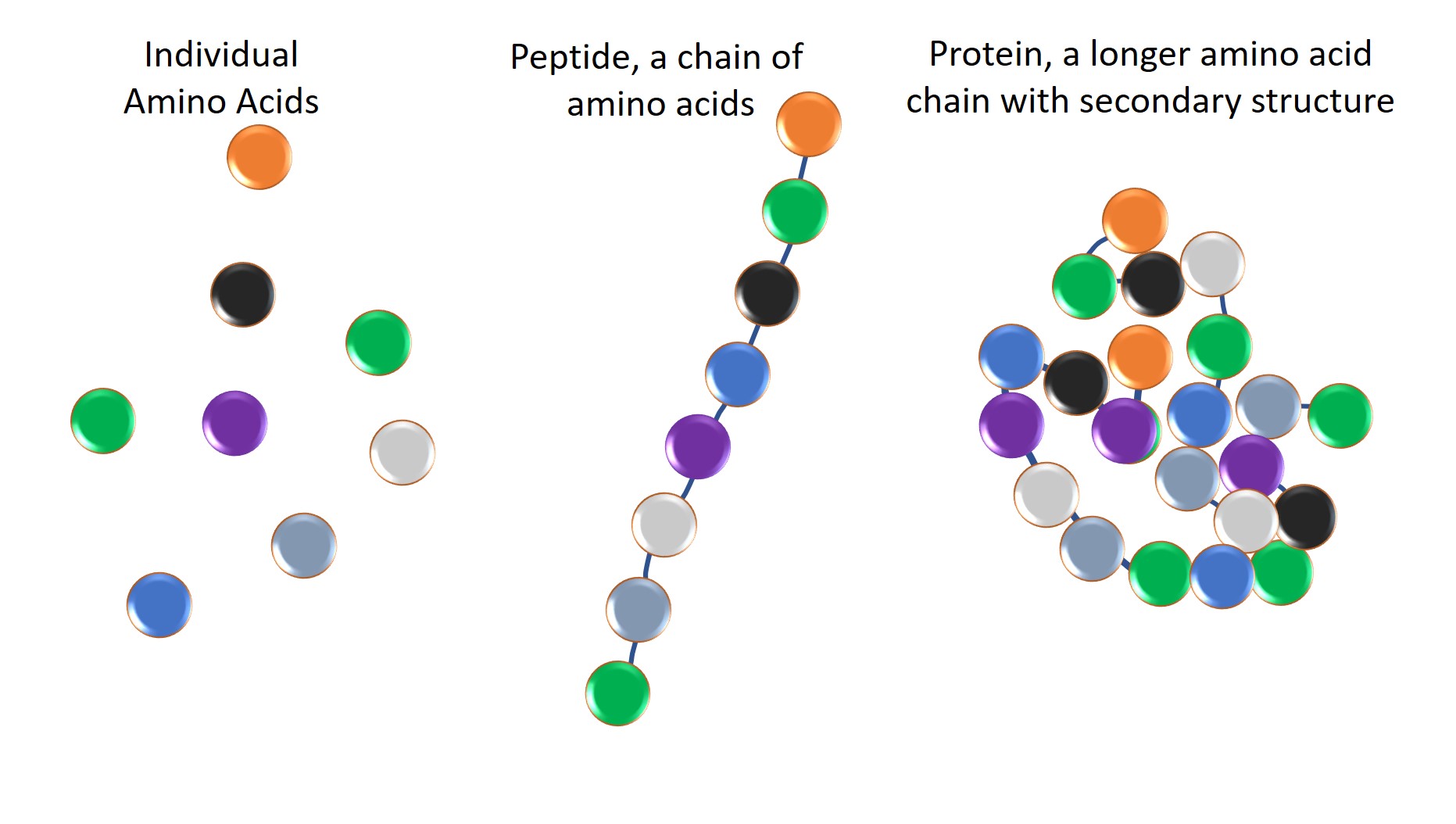 Proteins serve as structural and functional components of tissues and organs.  Proteins are required for basically all cellular functions and are as diverse as the functions they serve.

Enzymes catalyze and speed up reactions that are required to sustain life.  DNA replication, for example, requires several enzymes including DNA polymerases, DNA primases, DNA helicases, DNA ligases, and topoisomerases. Enzymes often require cofactors to function efficiently.  For example, tyrosinase depends on its cofactor, copper, in order to facilitate the reaction that produces the pigment, melanin.

Antibodies, such as immunoglobulin G (IgG), are proteins that defend the host against pathogens by recognizing and binding to foreign antigens. Autoantibodies are antibodies produced against proteins that naturally occur in the body and can lead to autoimmune conditions.

Messenger proteins transmit signals in paracrine, autocrine, and endocrine fashions. Several growth factors are examples of messenger proteins.  At the same time, proteins are also receptors that recognize specific ligands (signaling molecules) and respond by initiating one or many signaling cascades and subsequent biological responses.

Transport proteins transport small molecules throughout the cell and between cells.   Transmembrane proteins allow for selective transport of molecules into and out of a cell.

While the function of peptides may not be quite as diverse as those carried out by proteins, they are indispensable for biological functions.  Peptides act as signaling molecules, including neuropeptides, peptide hormones, and polypeptide growth factors.

Peptide hormones transmit signals between cells by binding to membrane-bound receptors. Insulin is a peptide hormone secreted by pancreatic β-cells that facilitates the uptake and storage of glucose.

Oxytocin is a neuropeptide produced by hypothalamic neurons and secreted by the pituitary gland that is involved in a variety of neurological functions as well as other systemic effects, such as protection from cardiovascular disease.

Peptide growth factors, including TGF-β, are critical for proliferation, differentiation, and many cellular functions.

In general, the shorter a protein, the more unstable it will be. Conseuqently, peptides have greater issues with effective therapeutic delivery than proteins. PODS technology has been developed to address these issues of instability and has been shown, for example, to enable long-lasting effects of growth factors to treat cartilage injuries.

Proteins have served as both the targets of therapeutic strategies and the therapeutics themselves.  G-protein coupled receptors (GPCRs) are probably the most targeted protein for therapeutics.  This is likely due to the multitude of physiological functions they are involved in.  Proteins can also serve as therapeutics themselves.  A wide variety of monoclonal antibodies have had a revolutionary impact on medicine and have been developed to treat a range of diseases including cancer. For example, immune blockade inhibitors such as Keytruda, are antibodies. In addition, protein drugs such as growth factors have been developed for regenerative applications.

Peptides have recently garnered increased attention as therapeutics, though they have been utilized for this purpose since 1922 with the introduction of insulin as a treatment for type 1 diabetes. Today, more than 80 peptide drugs are available. Because many peptides serve as ligands for GPCRs, there is a variety of peptide therapeutics being studied or currently available that target GPCR proteins. Peptides also have potency in other disease areas, notably infectious disease, and are being developed to address increasing levels of antimicrobial drug resistance.