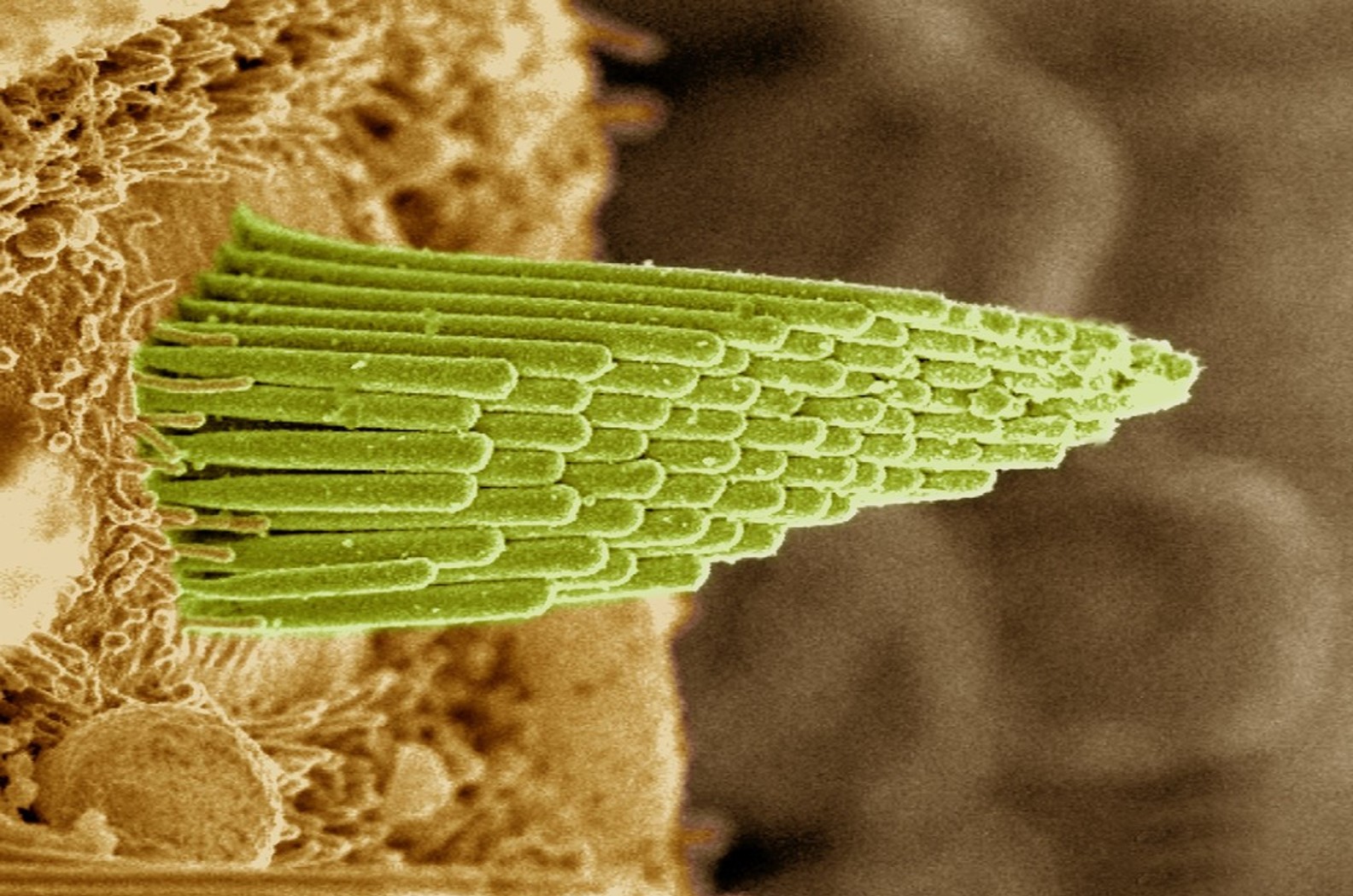 Cochlear implants (CIs) do not produce the same rich sound experience that can be provided by properly functioning ears.  One limitation on performance is the quality of connection CIs form with auditory nerves they electrically stimulate. This connection may be improved by co-implanting iPSC-derived otic neuronal progenitor cells to help bridge the gap. A “neurotrophic strip” containing slowly releasing growth factors that generate a growth factor gradient ensures these neurons extend in the right direction.

CI surgery has become the treatment of choice for children and adults with severe to profound hearing loss. According to the NIDCD, a cumulative 739,900 devices had been implanted worldwide prior to 2020.  Implantation is necessitated by a wide variety of conditions. In children, hearing loss is often a result of congenital defects. In adults, CI implantation most commonly occurs following damage caused by disease, medical treatment side effects, or injury.

The CI has two components; an external microphone and processing unit behind the ear connected to an internal device in the inner ear. Following implantation, the hearing ability of the recipient can remain poor with limited ability to decode intonation and music as well as poor performance in noisy environments. A key reason for this is poor integration of the CI with spiral ganglion neurons (SGNs), the nerves that carry stimulation to the brain.

Akihiro Matsuoka, an ear surgeon, and his colleagues at Northwestern University in Chicago aim to close this “electrode-neuron gap” by using a “neurotrophic strip” on the surface of the CI. This strip contains a combination of human pluripotent stem cell (hPSC)-derived otic neuronal progenitor (ONP) cells and BDNF (brain-derived neurotrophic [growth] factor) that supports ONP survival and directs vigorous neurite outgrowth.

To create just the right conditions for extensive neurite outgrowth oriented in the right direction toward the SGNs, Prof. Matsuoka’s team generated a BDNF gradient using the PODS® BDNF. This is a depot formulation with BDNF protected within a protein crystal which slowly degrades to release the BDNF. The team chose PODS® because the system provides just right levels of BDNF over a period of several weeks to form a gradient.

The PODS® crystals slowly degrade under the action of resident proteases, secreted by cells in the ear, causing the BDNF cargo to be slowly released from this crystalline formulation to form a gradient guiding neurite outgrowth. Prior to using PODS® BDNF with cells, a statistical model, of a kind often used in mechanical engineering, known as a finite element model (FEM), was run to predict optimal BDNF concentrations. This was followed by testing of PODS® BDNF and the ONP cells in a multi-chamber microfluidic device.

The studies showed that the concentration gradients generated by PODS® BDNF enable survival and neuronal differentiation of the implanted ONPs towards the SGNs. This demonstration of a “neuro-regeneration nexus” should pave the way for next-generation cochlear implants able to provide significantly better hearing to their recipients.