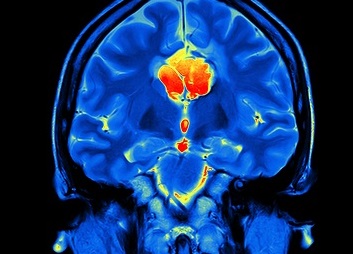 PD is a progressive degenerative neurological disease that affects about 1% of the population over age 55. Although there are many variants of the disease, a common strand that links these variants is damage to a finite group of dopaminergic (DA) neurons in the midbrain. As these neurons are lost in PD, CNS function and in particular its control over normal muscular function declines. Tremor is a well-known symptom which characterizes PD, but sleep, digestion, cognition, and mobility are also affected with increasing severity as the disease progresses. Current therapies, such as dopamine replacement therapy, only address symptoms and there is an urgent need for a disease-modifying therapy.

The mode of delivery is critical to the effectiveness of therapy. Stereotactic surgery allows direct access to the DA neurons suggesting it may be possible to replace them with cell therapy or restore their function with neuroprotective agents, without causing widespread off-target side-effects.

Over the past two decades, cellular therapy and treatment with growth factors such as GDNF have both been intensively studied as monotherapies. Although many in the field see GDNF (and other growth factors) therapy as having “had its day“, others view inconclusive GDNF clinical trial results as encouraging. For example, a clinical trial that completed in March 2019 delivered GDNF directly to the midbrain using “convection-enhanced delivery” (CED) allowing repeated dosing following surgical implantation of the CED device. This study produced inconclusive results: a clear difference between the groups was not statistically significant. This was possibly due in part to a study design which allowed all participants, including the placebo control group, to receive the active drug for half of the treatment period. The mechanism of delivery also appears sub-optimal. Although the patients received monthly doses, this period is significantly longer than the half-life of GDNF.

Viral delivery of GDNF holds the promise of more constant, better delivery. According to clinicaltrials.gov, there are two ongoing trials in the US using AAV-2 to deliver GDNF. The hope is that these trials will show that GDNF alone, if delivered effectively, will impact PD progression. Both trials are expected to report results in 2022.

It is also worth noting that, although AAV vectors are approved for some therapies, concerns remain about their safety including a recent study in dogs which showed a long-term link to cancer. With no alternative, these risks will likely be acceptable to regulators.

Neurotrophic growth factors such as GDNF support existing cells. In contrast, cellular therapies replace the damaged cells. Whilst either approach may work alone, there is a clear rationale for combining the two. Cells generated in-vitro for use as cellular therapy are poorly equipped to withstand the shock of transition from an in-vitro environment back to an often hostile in-vivo environment and tend to have very low rates of survival. The injured status of the implant site may contribute to this attrition. Adding a neurotrophic growth factor as a “survival agent” alongside implanted neuronal cells, to help them through the engraftment process and withstand the harsh environment, looks promising.

A group at Monash University reported the effect of treating transplanted cells with GDNF and found that engraftment efficiency increased at least 10-fold from <1% to 10%. In this case, an AAV vector was used to deliver the GDNF. Although GDNF improved survival, it’s not clear if the implanted cells or the GDNF were responsible for improved locomotory function in the treated rats, as the authors found that functional recovery was seen in GDNF treated rats independent of transplanted cell survival.

PD is deservedly a high profile disease attracting much research funding, but frustratingly little progress has been made in the clinic. Will the combination of neurotrophic growth factors with neuronal cells finally offer real prospect an effective treatment for PD patients? Given the progress made, this approach will encourage other studies and we may not have to wait too long to find out.