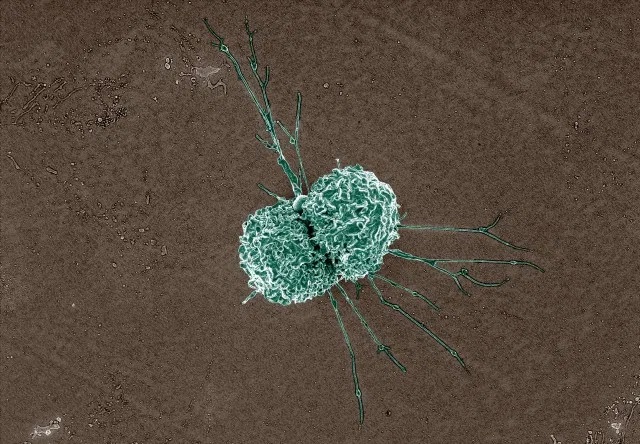 Macrophages are extraordinary cells. Not just for their phagocytic capacity, which is also shared by a few other cells, but also for their ability to dynamically adapt their function to intervene in unfolding events.

For most cells, differentiation (specialization) from their progenitors (parent cells) is a one-way street – their roles become fixed as they terminally differentiate. In contrast, macrophages can switch between entirely different phenotypes.

Most macrophages start their 2-week life in bone marrow as monocytes. Following release into the blood, monocytes invade tissues and differentiate to early-stage macrophages which are then polarized into a wide spectrum of phenotypes, with M1-types and M2-types roughly at opposite poles of the spectrum. M1 macrophages are pro-inflammatory and M2 macrophages are involved in tissue remodelling. The local microenvironment, including reactive oxygen species and cytokines released by other cells, influence the macrophage’s polarization.

Circulating macrophages carried in the blood will home particularly towards sites of injury or infection polarizing to M1-types. Subsequently, once the infection has cleared, the recruited macrophages can transform, re-polarizing themselves to M2-types to orchestrate wound healing. Macrophages are the sappers of the cell world: seeking out and fighting invaders, removing unwanted cells and then constructing new tissues. Viewing macrophages in vitro with a time-lapse video, the mobility, industry and energy of these cells, continuously probing, looking for work, is impressive.

All that macrophage talent is difficult to control. This ability of a macrophage to adapt to its environment produces vulnerabilities as well as capabilities: macrophages have a dark side. They are the cells primarily responsible for releasing cytokine storms which arise, for example, in sepsis and following treatment with certain drugs (such as high-dose IL-2 used for therapy of malignant melanomas and renal cell cancers). In many cases, these cytokine storms can be fatal. Macrophages also underlie many autoimmune diseases, attacking the body’s own cells. For example, they are involved in the pathogenesis of rheumatoid arthritis and inflammatory bowel disease.

Cancer is another arena where things can go horribly wrong for the macrophage. Once inside an advanced tumour, these law-enforcers of the cell world can be subverted.

In the very early stages of cancer, macrophages will attack and remove cancer cells. Most nascent cancers are actually snuffed out in the early stages of their development by this mechanism. Macrophages, therefore, play an important role in protecting us from cancer. However, cancer wages a campaign of attrition against the macrophages in three steps.

Firstly, some cancer cells acquire mutations which provide a way to evade immune surveillance. These cells will then outgrow adjacent cancer cells to become dominant. This “immune-editing”, eventually allows entire tumours to avoid macrophage attack. Specific mechanisms that enable this immune-escape have been uncovered. To stop engulfment by macrophages, cancer cells express large numbers of the CD47 “don’t eat me” antigen on their surface. This is an antigen that helps reign in and limit macrophages’ appetite for normal cells. Cancers “learn” that making lots of this CD47 protein can protect them. At least 20 companies are developing therapies that target the CD47 axis including Forty Seven, recently acquired by Gilead for $4.9Bn.

Secondly, cancer cells also develop mechanisms to force macrophages to polarize into pro-tumour M2-like phenotypes. Not only do these M2 cells fail to attack cancer cells, but they also quell the activity of other immune cells. For example, M2 macrophages secrete cytokines that suppress other immune cells and they also secrete large amounts of PD-L1, which suppresses cytotoxic T cells.

Finally, macrophages are co-opted to actively assist tumours, acting as a chaperone to cancer cells during metastasis and helping them break out from the tumour into the circulatory system. Macrophages then accompany the circulating cancer cells in clusters travelling as bodyguards to invade new metastatic sites.

All of these macrophage activities and behaviours, that go right to the heart of many diseases, have naturally attracted the attention of medical researchers. There is reason to believe that some of their efforts will be successful if the track record of therapies that target other immune cells, such as cytotoxic T cells is a guide. Most of these existing therapies, including PD-L1 inhibitors, CAR-T cells and IL-2 therapy, enable cytotoxic T cells to function against cancer and have made huge impacts on specific tumour types.

The particular attributes of macrophages (availability of their progenitors in bone marrow and blood, phagocytosis and ongoing recruitment to tumours as well as sites of injury or infection), suggest it may be possible to develop a Macrophage-Mediated Molecular Trojan Morse (MAMMOTH) therapeutic strategy. However, there are significant obstacles to this. Difficulties associated with any MAMMOTH strategy include:

For example, Macrophage Therapeutics is developing a macrophage-mediated system for delivering steroids to treat autoimmune diseases.

Research interest around macrophages in disease is increasing; 70% more papers in the field were published in 2019 compared to 2009. More specifically, research interest in the use of macrophage-mediated drug delivery systems is growing. If the versatility of macrophages can be harnessed to effectively deliver drugs to the site of disease, we could witness a surge in availability of treatments available for a wide range of diseases, many of which currently have no effective, disease-modifying therapy.