Home Blog From infection to inflammation 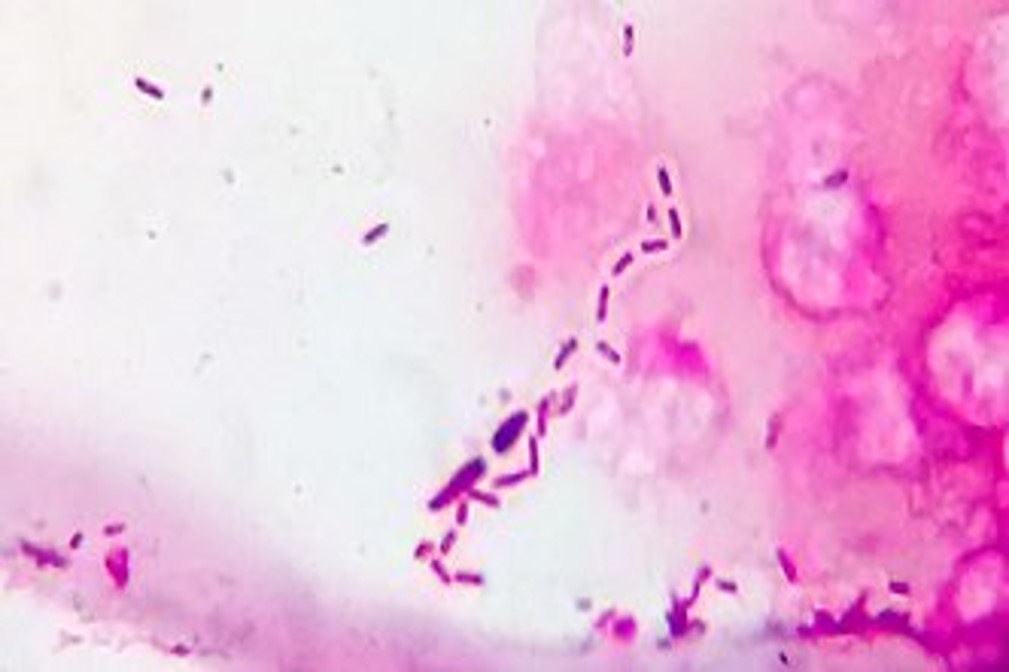 From infection to inflammation

Everyone is familiar with the causes (infection, irritation, injury and others) and symptoms (swelling, heat, pain and redness) of inflammation. But what is the process that connects the cause with symptoms of inflammation? Here, focusing on inflammation caused by pathogens, we provide a brief overview of one of the most important processes in the human body.

As viruses, yeast, bacteria or protozoan parasites enter at the body, they are confronted by macrophages, which are present in all tissues, that engulf and ingest the pathogens in a process called phagocytosis.

These ingested pathogens are partitioned within the cell into small walled vesicles called phagosomes (see 1 in the graphic) which subsequently fuse with cellular structures called lysosomes to form phagolysosomes (2). Conditions inside phagolysosomes are acidic and protease rich. These harsh conditions start to break down the pathogen. 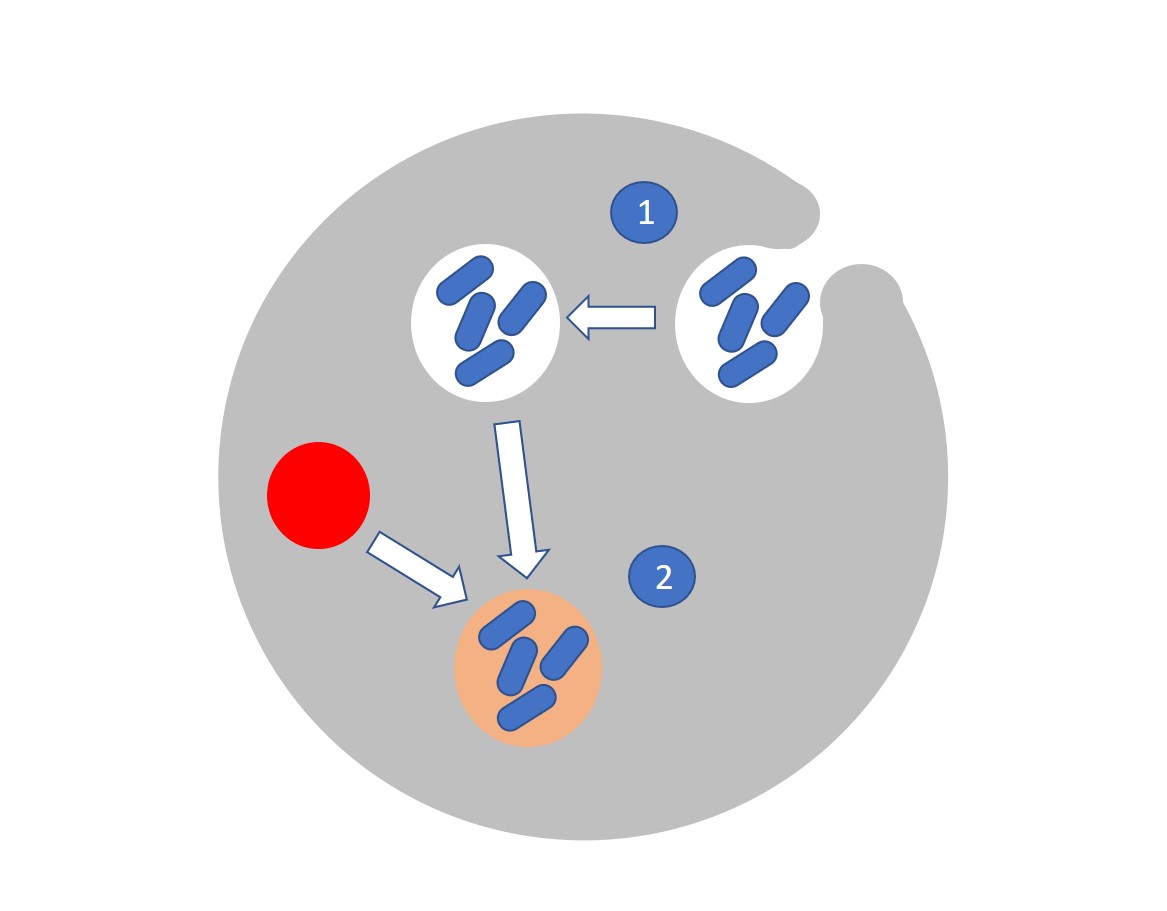 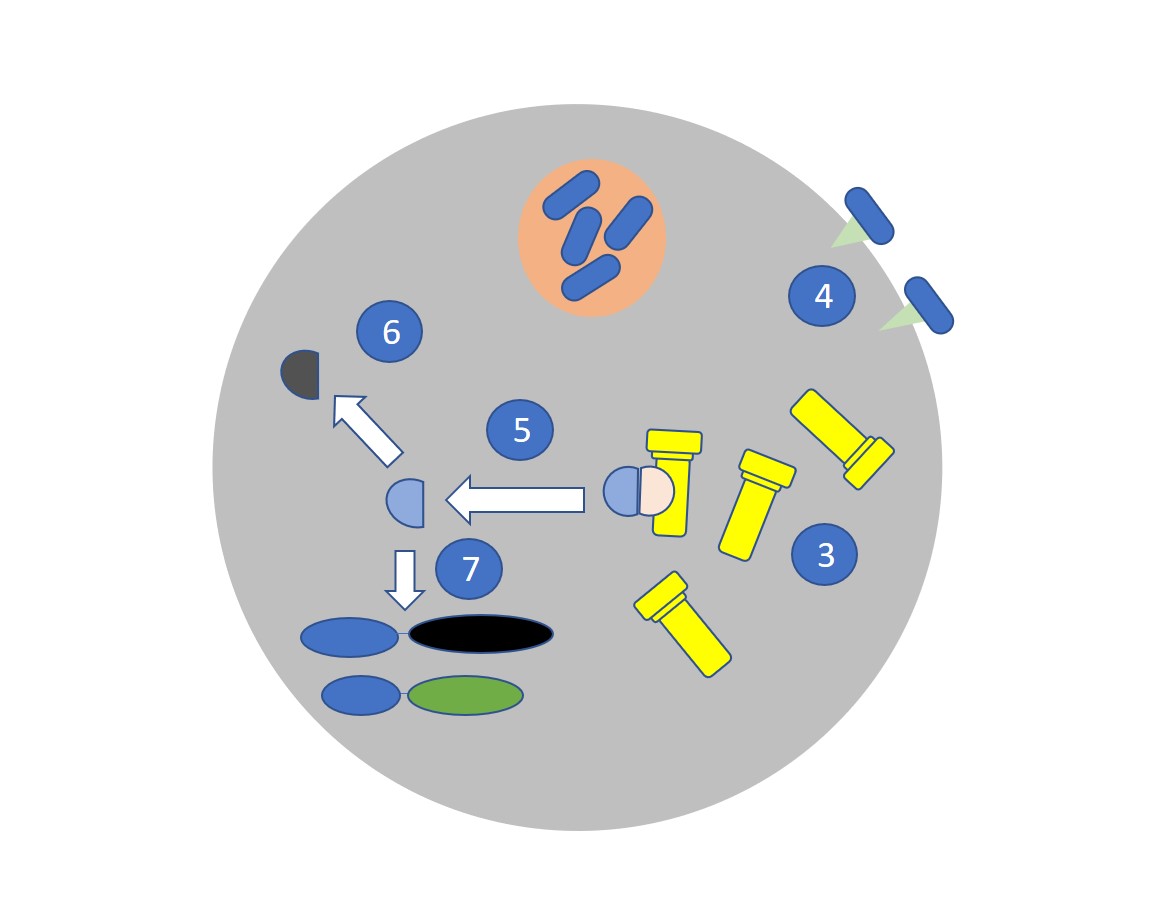 The presence of the pathogen cell triggers the assembly of the inflammasome (3). Inflammasome formation can also be triggered by extracellular sensing of pathogen-associated molecular patterns (PAMPs) by pattern recognition receptors (PRRs) such as Toll-like receptors (4).

Inflammasomes are large structures assembled from three proteins that are already present in the cell but only assemble when triggered. The NLRP3 inflammasome, for example, is assembled from NLRP3, ASC, and pro-Caspase-1.

The assembled inflammasome causes the release of active Caspase 1 (5) which activates the NF-Kβ transcription factor pathway (6) and cleaves the pro-inflammatory cytokines pro-IL1 β (to IL-1 β), pro-IL-18 (to IL-18) (7). Gasdermin is also activated to an active form which forms pore structures in the cell surface (8) which leads to pyroptotic cell death and the rapid release of proteins including alarmins (9)(also known as damage-associated molecular patterns or DAMPS). Along with IL-1 β and IL-18 these molecules attract more immune cells from the blood. 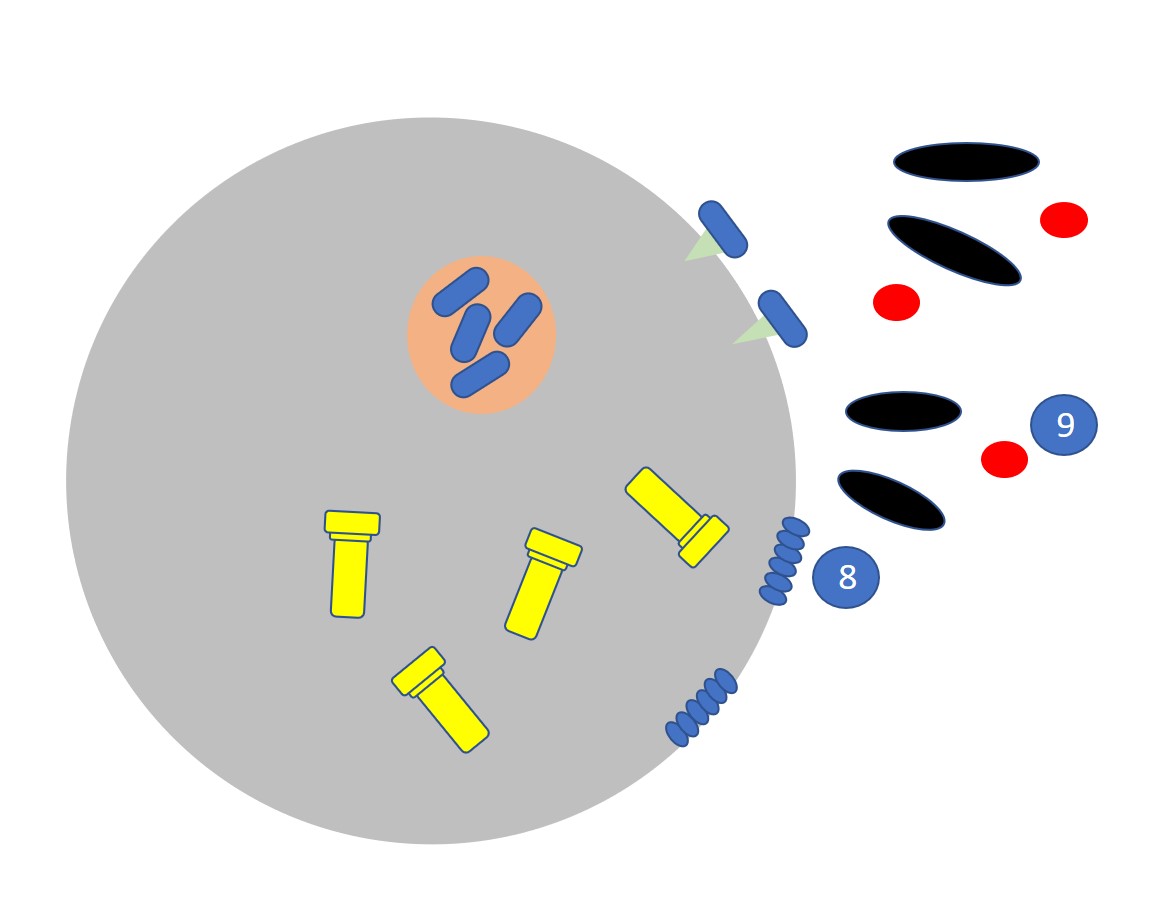 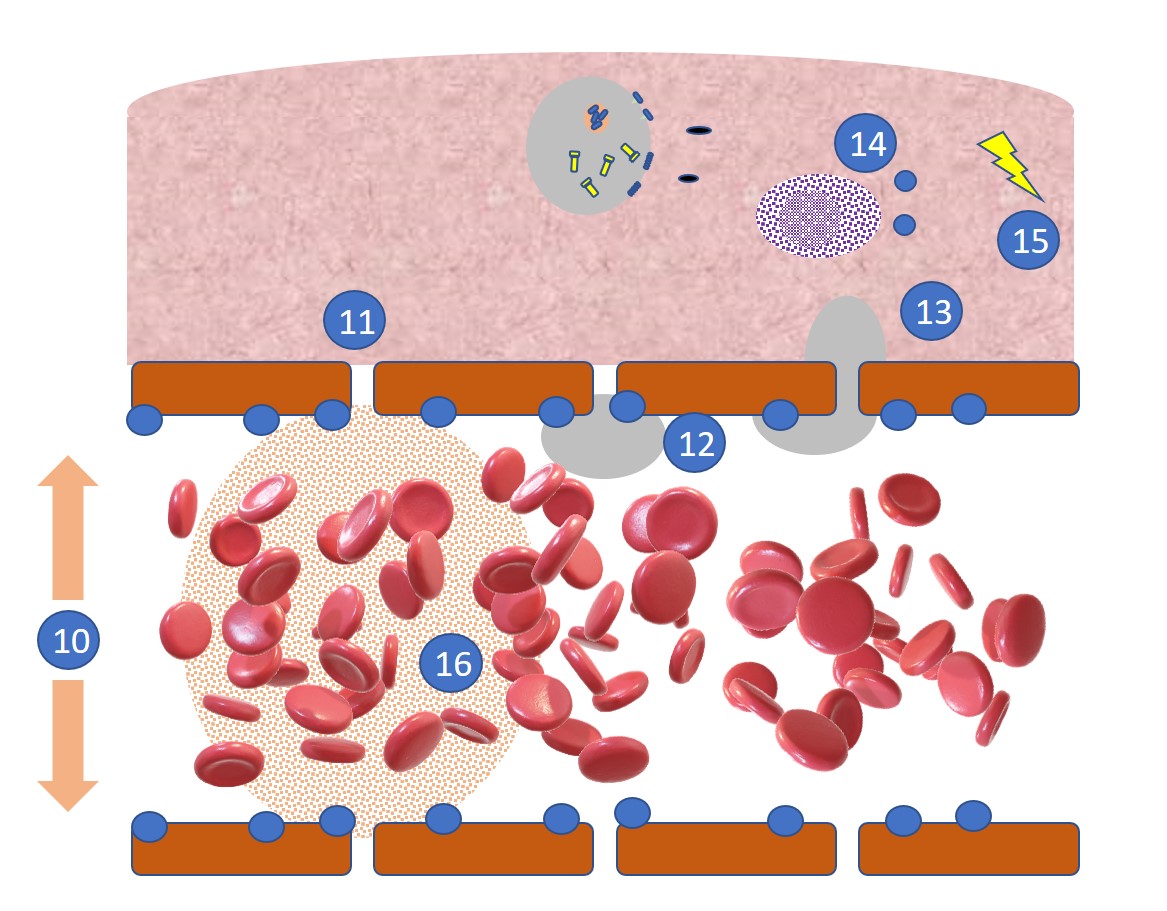 The heat and pain associated with inflammation are partly caused by an increase in blood vessel diameter (10) which also results in slower blood flow. Under the bioactivity of the cytokine TNF-α, blood vessels also become more permeable (11) with small spaces opening up between the endothelial cells of the blood vessel wall allowing leakage of the capillary. This contributes to redness and swelling.

The endothelial cells also express increased levels of selectins, ICAMs and integrin receptor molecules (12) to which circulating leukocytes, such as neutrophils and monocytes can attach. This attachment process is aided by the slower blood flow in the dilated blood vessels. After attachment, the cells extravasate (13) (move from the blood vessel into the infected tissue), attracted by chemotactic agents such as chemokines released by the pyroptotic cells. MAST cells (14) are also recruited to the site and release histamines causing further permeabilization.

The damage to blood vessels causes the release of kinin and coagulation cascades. The kinin cascade leads to the release of bradykinin which causes blood vessel permeability and the release of prostaglandins which bind nerves causing pain (15). At the same time, blood-clotting factors are released. These promote clot formation which prevents the further spread of the pathogens (16).