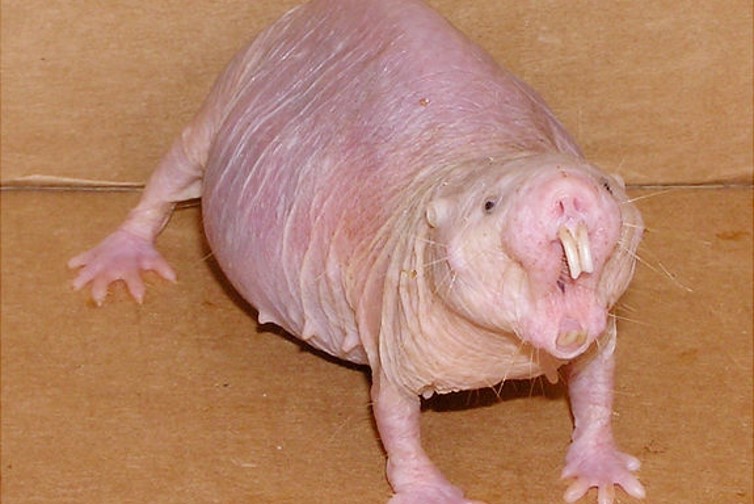 The naked mole rat (Heterocephalus glaber) is a small burrowing rodent native to East Africa. This mouse-sized animal lives underground inside extensive networks of tunnels, in large interrelated communities of up to 300 individuals. Naked mole rats (NMRs) are unusual as they are one of only two known eusocial mammalian species (the other being the Damaraland mole rat), in which a female queen and up to three males are the sole reproducing colony members. All other individuals sacrifice their own reproduction for that of the queen, remaining sexually immature and performing other communal tasks for the benefit of the colony: foraging, burrowing, defense, and brood care.

Besides this unusual social system, naked mole rats possess many characteristics and adaptations that have made them exciting model species for the study of aging, aging-related diseases, and cancer resistance.

Typically, the lifespan of a mammal can be reasonably well predicted simply from its body mass. For example, a mouse has a lifespan of around three years whereas the larger guinea pig can expect to live a maximum of 12 years. The naked mole rat, with a body mass falling in between these two other rodents, defies these expectations, with an incredibly long lifespan of up to 30 years, and with some individuals in captivity exceeding that age. They are also resistant to developing aging-related diseases such as diabetes and neurological degeneration and have a very low incidence of cancer. Although interest in naked mole rats arose originally due to their eusociality, over the past decade research into these mechanisms of resistance has accelerated, particularly as there is huge market potential for new therapeutics to combat aging.

Alzheimer’s disease (AD) is an example of an aging-related disease for which naked mole rats are an interesting test species. AD is characterised by the accumulation of abnormal levels of amyloid-beta proteins, which form plaques in the brain that are in turn associated with neuronal and brain tissue damage. Surprisingly, NMR brain tissue has a very high level of amyloid-beta, but it is not prone to aggregation and plaque formation. Understanding how NMRs are able to tolerate this neurotoxic peptide without disease development would be valuable for developing prophylactic medications.  One hypothesis is that the NMR neuronal cell membrane composition makes it resistant to both lipid oxidation and plaque formation: NMR membranes have low levels of DHA (susceptible to peroxidation), and high levels of plasmalogens (resistant to peroxidation).

NMRs experience a very low incidence of cancer. A few occurrences in NMRs have been described, but these tend to be small and non-fatal when they do arise. Initially it was thought that inherent traits of NMR cells rendered them resistant to cancer, but more recent work has put more emphasis on the microenvironment that these cells reside in (both the molecular makeup of the extracellular matrix and the immune system) in preventing cancer growth.

One molecule that has received particular attention is hyaluronan (HA), which in humans has been related to maintaining skin hydration: structural changes in the molecule are fundamental to the process of skin aging. In humans, HA is also closely linked to cancer development, with high levels of HA in cancers associated with a poor prognosis. The receptor for HA is CD44, which is intimately linked to the cytoskeleton and feeds into downstream signaling pathways including those related to the oncogene p53. CD44 also has a role in cancer cell extravasation, which is the main mechanism via which metastasis arises.

In NMRs, HA appears to have very unusual properties that may explain their cancer resistance to some extent. The HA they produce, rather than forming fibers like the HA extracted from mouse tissue, forms highly folded structures called ‘supercoils’. These structures may have a lower interaction with the CD44 receptor, dampening signaling in the p53 pathway and hence reducing the propensity for cells to turn cancerous. These folded structures may also present a physical barrier for cell invasion, a common behavior of cancer cells, meaning that they are unable to proliferate and form tumors as easily.

NMRs also have profound differences in their immune systems. Researchers at Calico Life Sciences,  a biotech firm focused on aging, used single-cell RNA sequencing to compare immune cells resident in the spleens of mice and NMRs. The latter exhibited a much-reduced lymphoid cell population with a surprising complete absence of Natural Killer (NK)cells, which are thought to be crucial in combatting both viruses and cancers. They also have a novel myeloid lineage lipopolysaccharide responsive granulocyte cell subset. It’s thought that these adaptations may have arisen due to the lack of viral infections within their underground burrows where they rarely interact with other species that may act as viral vectors. This has biased their immune systems to combat bacterial infections, and so increased the ratio of myeloid lineage immune cells. If lack of NK cells has contributed to NMR cancer resistance, it is as a by-product of this initial lack of selective pressure leading to loss of NK-related genes.

Here at Cell Guidance Systems, we are also interested in the interactions between cancer and the immune system. We have recently published our work on macrophages as carriers of PODS® proteins, a potential Trojan horse immunotherapy strategy against cancer. Further understanding of how the NMR immune system contributes to their tumor resistance could contribute to the development of further treatments, including immunotherapies, against cancer.

There are many other proposed mechanisms for the profound longevity of NMRs, including improved splicing regulation, epigenetic stability, a by-product of their ability to withstand hypoxia and anoxia, or greater mitochondrial ROS consumption. The reality of the situation may be that multiple factors contribute to their lifespan, arising from the peculiarities of their habitat and environment. For now, they are an interesting alternative model organism for study that may yet prove to change the way we age.