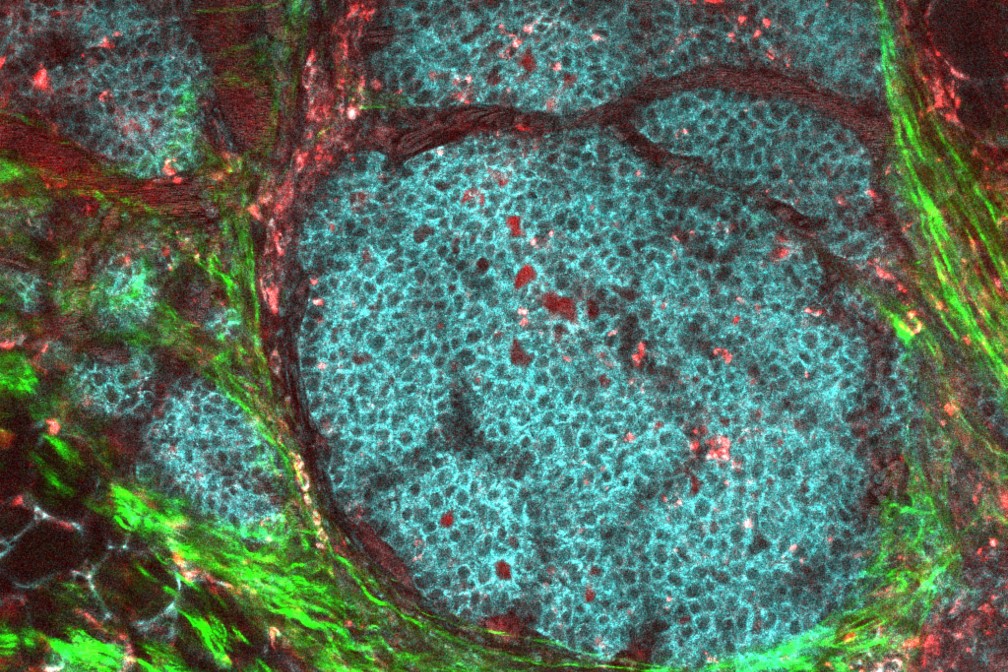 The tumour microenvironment (TME) is a dynamic, highly heterogeneous structure consisting of both transformed (mutated) cells, non-transformed cells (including immune cells, stromal cells and blood vessels) and microbes. These cells are held in an extracellular matrix of proteins and other factors secreted by the cells. An increased understanding of the TME is behind many of the latest advancements in cancer therapy.

As a result of our understanding of the function of the TME, our notion of cancer as a genetic disease, in which only the cancer cells are targeted for treatment has now been completely replaced by a view in which other components of the TME, including the genetically normal cells and microbes, also act as important modulators of cancer progression and provide targets for therapy.

This is part of an intricate mechanism of crosstalk that develops between the host stroma and tumor cells. This dynamic interplay includes a complex signaling network of cytokines, chemokines, growth factors, inflammatory mediators and matrix remodelling enzymes. Details of the mechanisms of interaction are emerging, including the relevance of tumour- and stroma-derived exosomes in shaping the TME through modulation of fibroblast activation, ECM production, angiogenesis and immune surveillance. The role of exosomes in an oncologic scenario is only also emerging.  These exosomes secreted by the TME also find their way into blood and provide an opportunity to survey the biological status of the TME non-invasively through liquid biopsy (taking blood samples).

Much of the TME is immune cells. For example, as much as 50% can be macrophages. These immune cells have phenotypic plasticity and, as with the concept of immunity as ‘a double-edged sword’, a dichotomy exists between the relationship of tumor cells and their TME.  In particular, tumor-associated immune cells play pro- and anti-tumorigenic roles at different stages of the tumor invasion-metastasis cascade.

A role for microbes with the TME has emerged. Microbes can provide a source of irritation that may lead to cancer. Evidence of microbes can also be found in most cancers. Although not part of the TME, microbes in the gut can have a significant impact on the efficacy of a cancer drug.

Six localized and specified microenvironments within the TME, have been defined. These include hypoxic, acidic and innervated niches, and metabolic, immune and mechanical microenvironments. A review comprehensively describes how these microenvironments define the resilience and immunogenicity of the tumor through various overlaps and crosstalk mechanisms with one another.

The significance of TME-targeting to advance cancer treatment was further highlighted by Sammy Ferri-Borgogno and her colleagues. The team studied the composition in one tiny area of TME, showing dramatic differences in the TME occurring over a distance of 100 microns and suggested how the location/placement of related cancer cells and their relationship with their respective microenvironments are critical to determining treatment outcome.

Experimental model systems are being developed that accurately mimic the complexities of TME to understand the dynamic relationship between each mediator involved in the signalling networks of the TME. Once those networks are understood, researchers can develop ways to stop these signals to then stop tumor development. It is the immune cells which have become one of the most important targets for therapy. Immunomodulatory drugs such as checkpoint inhibitors, cytokines and CAR-T cells disrupt the TME status quo. These have transformed the management of many, but not all, cancers.

The reasons why some cancer types respond to therapy, whereas as others, such as glioblastoma and pancreatic cancer, are difficult to treat is not clear. For immunotherapies, one hypothesis that has gained widespread traction is the concept of tumors being immunologically “hot”: Cancers, such as melanoma, which have many mutations provide more opportunities for the immune system to discriminate against the cancer cells. Another reason for poor therapeutic response may be the physical differences in the extracellular matrix. In pancreatic cancer, for example, pancreatic stellate cells secrete a dense matrix which may provide a challenge for drugs to permeate to reach target cells. Together with collaborators at Stanford University, at Cell Guidance Systems, we are utilizing PODS protein crystals to turn immune cells into molecular Trojan horses able to deliver therapeutic cargos into the heart of cancers.