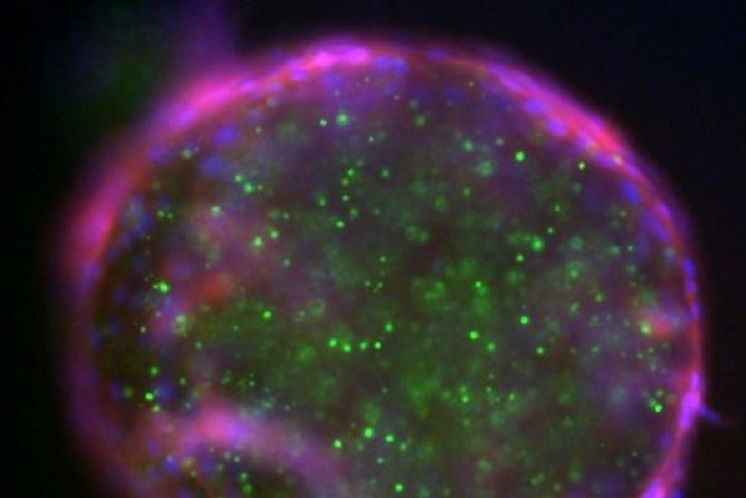 Matrigel and similar products such as Geltrex, have become essential reagents for 3D cell culture. Matrigel contains a mixture of major basement-membrane extracellular matrix (ECM) proteins (e.g. laminin, collagen IV, entactin and the heparin sulphate proteoglycan perlecan). It is also packed with growth factors and many enzymes. As such, it provides an ideal structural and biological environment for culturing cells and is used in a myriad of applications in many formats.

For example, Matrigel is used as thin sheets for culturing a range of cells, from neurons to human pluripotent stem cells. As thicker coatings, Matrigel has been utilised to investigate endothelial tubulogenesis, and as 3D scaffolds, it can effectively encapsulate cells to enable organoid assembly.

However, Matrigel’s complex hydrogel matrix is poorly understood.  It is manufactured from Engelbreth-Holm-Swarm sarcomas generated in mice. It is, by its very nature, ill-defined, with the hazard of carrying xenogeneic contaminants. Studies on the composition of Matrigel matrix show levels of some proteins varying considerably from batch to batch with some important proteins becoming undetectable. For example, one study revealed that signalling molecules like insulin-like growth factor I and epidermal growth factor were expressed at levels in the order of ng/ml but were not detected in 4 independent Matrigel batches investigated in a later study. Equally discouraging, disparities in the mechanical properties of Matrigel have been identified across different batches as well as heterogeneities within the ECM itself, resulting in localized areas of Matrigel with different elastic moduli. These shortcomings, particularly the risk of xenogeneic contaminants, mean that Matrigel is unlikely to be useful for generating cells suitable for clinical use in humans.

Interest in using stem cells for medical applications has exploded since Yamanaka’s breakthrough in generating induced pluripotent stem cells was published almost 15 years ago. Yet the application of stem cells in cellular therapy is faced with difficulties when culturing these cells; specifically, directing lineage-specific differentiation and production of xeno-free, homogenous cell populations.

Stem-cell fate is regulated by interactions between cells and their microenvironments (niches). The ECM forms an important part of the cellular microenvironment: its composition, elasticity and geometry all provide necessary cues to direct stem cell differentiation and function. Matrigel offers an ill-defined composition, spatially heterogeneity and has little capacity for tuning.  As a result, Matrigel can’t easily match the tissue-specific niches required to control and direct specific programmes of stem cell differentiation. Instead of a variable, one-size-fits-all offered by Matrigel, synthetic hydrogels that provide customized cellular environments offering apt biochemical and biophysical cues are being developed.

In order to encourage stem cell differentiation, tethered cell-adhesion motifs and growth factors, present in synthetic scaffolds, may be hand-picked to formulate specific formulations for each application. For example, one group of researchers used self-assembling peptide nanofibers functionalised with peptide motifs, such as those found in proteins which inhibit neural cell apoptosis, in order to generate hydrogels that provide optimal biochemical cues to neural cells. The nanofiber hydrogels successfully directed stem cell differentiation into neurons, astrocytes and oligodendrocytes. Compared to Matrigel and Collagen I gels, stem cells encapsulated in the defined peptide nanofibers showed superior survival and differentiation properties independent of matrix elasticity which was similar in the different hydrogels.

Owing to the ill-defined nature of animal-derived matrices, heterogeneities between, and even within, batches of Matrigel mean that cells experience different microenvironments, which in turn can lead to different, uncontrolled cell fates. In the above example, matrix elasticity was less important for axon growth than providing biochemical cues, but surface forces are also important for directing lineage-specific stem cell differentiation.

Matrigel has a relatively low (~400 Pa) stiffness, which can only be slightly increased by changing the overall matrix concentration, but this alters its biochemical composition and functionality. In contrast, synthetic scaffolds can be engineered to decouple matrix stiffness from biochemical properties.  This independent tuning of properties is enabling the development of more tailored hydrogels for specific cell culture applications.

Applications in regenerative medicine also require that pure populations of defined cell types can be manufactured at scale. By carefully manipulating properties such as bio-functionalization and elasticity, unique and well-defined synthetic scaffolds have been successfully used to select for certain cell types across the culture to achieve a more homogenous final cell population.

There remain significant challenges for the production of synthetic scaffolds. They require significant tuning to create a tailored environment to guide specific cell behaviour. The costs of large-scale production of such scaffolds could be very expensive. A further cost consideration when moving away from Matrigel products may be the need for manual replenishment of recombinant growth factors. Synthetic scaffolds should be developed to present growth factors with enhanced potency compared to soluble growth factors. Researchers at Cell Guidance Systems are combining PODS® sustained release growth factors with hydrogels. The PODS® nanocrystals allow for spatiotemporal control of growth factor concentration in 3D.

Synthetic scaffolds will also need to be created in a form that is easy to employ by the end-user. Electrospinning, micropatterning and 3D printing techniques are useful to recreate the structural geometry and porosity of the ECM.  A group of researchers at Kumamoto Univeristy in Japan showed that electrospun synthetic polyamide nanofibers promote differentiation of stem cells into functional hepatocytes. The expression of key hepatocyte-specific genes and albumin secretion was higher in cells cultured on the electrospun fibres than on Matrigel. These researchers postulated that the synthetic nanofibers potentiated differentiation into the hepatic lineage by interacting with pathways downstream of specific growth factors controlling cellular morphology and motility.

In summary, Matrigel and related products, while widely available in easy-to-use formats, do not provide a xeno-free, well defined or unique environment required for culturing stem cells for many regenerative medicine applications. Animal-derived, Matrigel matrices cannot be readily tuned, exhibit variable protein composition as well as heterogeneous mechanical properties. All of which makes it difficult to match the tissue-specific biochemical and biophysical cues required to direct lineage specific differentiation of stem cells and produce homogenous cell populations. These drawbacks have sparked a pursuit for synthetic alternatives leading to a range of studies and new product developments which will ultimately yield materials that will replace Matrigel.