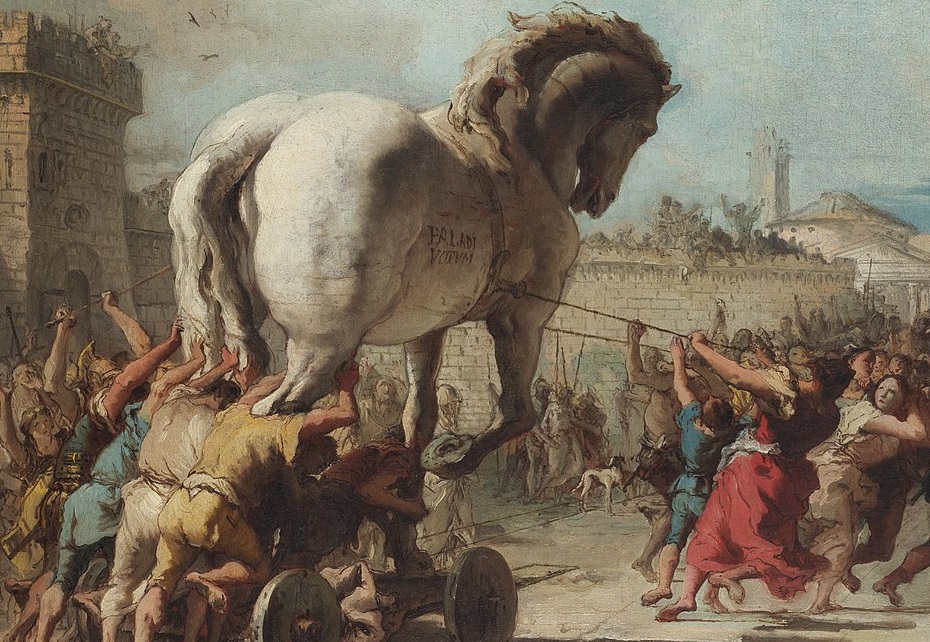 In drug development, the term Trojan horse encompasses a variety of strategies to deliver drugs in a concealed, safe and efficient way to the target. The main objectives of this strategy are firstly to overcome barriers, such as the blood-brain-barrier or simply the cell membrane, which shield the target (Troy) from a drug (the Greeks), secondly, to specifically attack the disease rather than the whole body and thirdly, to achieve a slow drug release over time with no sudden concentration peaks. This approach does not only sound awesome on a metaphoric level, but also makes use of some nifty biological tricks.

One tactic is to bind drugs to cell-penetrating particles or to monoclonal antibodies to deliver them directly to cancer cells. With 10 FDA approved antibody-drug conjugates (ADCs) and many more in clinical trials, this method has already proven a success, but is still undergoing constant improvement. Up until this year, all approved ADCs deliver cytotoxic agents, acting either on DNA or on tubulin, which are too toxic to be given unconjugated and are associated with severe side effects. Even when antibody-conjugated, these drugs can lead to toxicity if early liberation of the drug occurs. This year’s approval of cetuximab saratolacan sodium in Japan and a currently running global phase III trial of this drug could be a game-changer in the field of ADCs. Its novel engineering uses a conjugate of anti-EGFR antibody cetuximab and the photo-absorber IRDye700DX (IR700), which is cell damaging only when exposed to locally administered near infrared light and thus safe even when circulating the body unbound.

Another tactic is to load drugs directly into or onto whole cells, such as erythrocytes, platelets, leukocytes, macrophages and stem cells, or into extracellular vesicles (e.g. microvesicles and exosomes). The advantage of these cell-based systems over synthetic nano- and microcarriers is that they are highly biocompatible, biodegradable, non-immunogenic (if donor-recipient matched) and have the potential to pass otherwise impermeable barriers. Using whole cells as drug carriers offers additional benefits, such as protection from a rapid clearance by the patient’s immune system and efficient targeting.

The mechanisms of drug loading are manyfold (e.g. osmatic methods, electroporation, incubation and encapsulation) and depend on the cell type and its properties. For instance, the biopharmaceutical company EryDel (Milan, Italy) loads patient-derived red blood cells (RBCs) employing their own medical device, the Red Cell Loader, which uses a hypotonic pre-swelling method. Their product Ery-Dex, currently in a phase III trial for the rare neurodegenerative disorder Ataxia telangiectasia (AT), delivers the corticosteroid dexamethasone by encapsulating its pro-drug (dexamethasone sodium phosphate) into patient RBCs, which are then re-infused. Due to the hydrophilicity of its phosphate group, the drug is retained intracellularly within the erythrocytes until it is slowly dephosphorylated to its active form, which can then easily diffuse through the cell membrane. This slow and long-term release of dexamethasone from RBCs leads to a low but constant plasma concentration in AT patients, resulting in the beneficial anti-inflammatory effects without the strong adverse side effects otherwise seen with dexamethasone treatment.

Lowering toxic side effects and ensuring a steady release by encapsulating drugs inside donor-derived RBCs has also proven successful in the treatment of cancer patients. Eryspase, RBCs loaded with L-asparaginase, is currently undergoing a phase III trial in metastatic pancreatic cancer and a phase II trial in triple-negative breast cancer. With two drugs in phase III trials and many more in phase I and II trials, RBCs are pioneers among cell-based trojans.

Another Trojan horse, not yet in clinical trials but steadily gaining more attention as potential delivery vehicles, are macrophages. The inherent homing capabilities of these immune cells to reach damaged, infected or malignant tissue, make them perfect candidates for the directed delivery of drugs in small concentrations, which could lower the risk of drug-associated adverse effects even further. Many approaches of macrophage-mediated therapeutic delivery focus on drug-loaded nanoparticles, but the delivery of anti-cancer viruses and antisense oligonucleotides is currently also under investigation. Due to their phagocytic properties, the loading into macrophages can (in most cases) easily be achieved by incubation and can be modulated by changing the shape, size, or surface property of the cargo; however, a variety of other obstacles need to be overcome. The challenges of using macrophages as carriers are the toxicity of the drug to the carrier cells, impairment of macrophage functions (e.g. reaction to chemotactic stimuli), the achievement of a controlled therapeutics release and, most importantly, maintenance of cargo integrity. Even though there are a lot of promising ideas to address some of the problems, for instance by copying tricks microbes developed to survive within, kill or even use macrophages, there still seems to be a long way for the Trojan macrophage to reach the clinic.