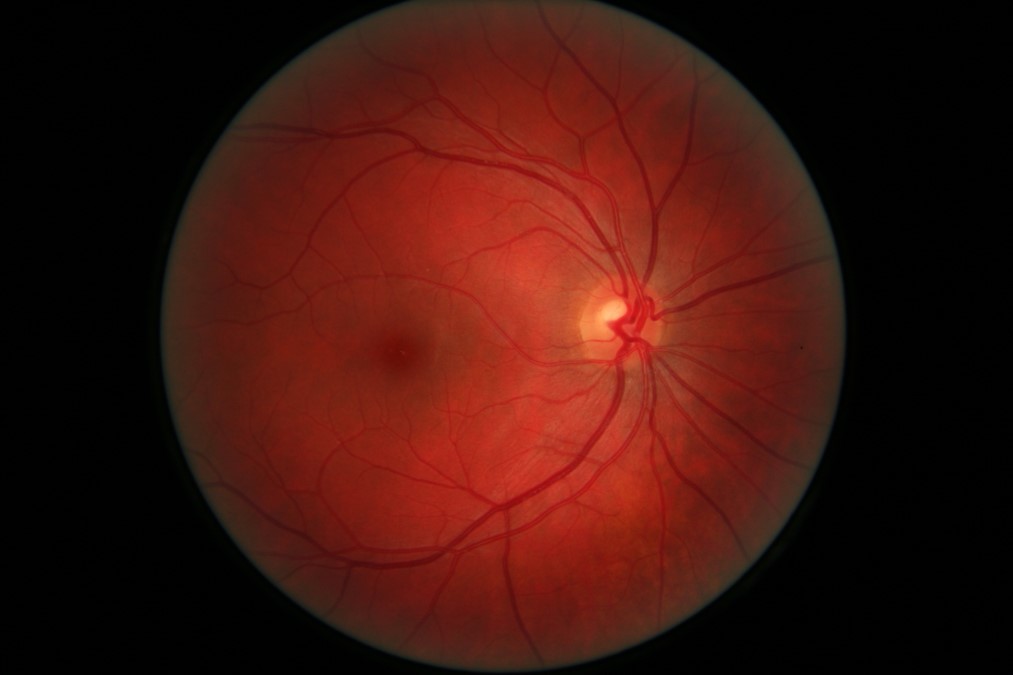 It is accepted wisdom that the visual sense is the dominant of the five senses for us humans. A notion that also has translated into sensory research. Or as the author of a paper in 2019 asked “Why Is There So Much More Research on Vision Than on Any Other Sensory Modality?” in which he observed that more textbook and journal article inches are spent on vision than on any other sensory modality across multiple disciplines ranging from biomedical sciences to perception and cognitive psychology.

The American Foundation for the Blind fielded a survey in 2007 to gauge the attitude of American adults towards severe vision loss and blindness. The 1,000 participants ranked vision loss as the most debilitating from a variety of health conditions, on par with paralysis. Compared to deafness, they took the view that blindness is more than 7 times as negatively impactful on quality of life, with 75% citing the loss of independence as the biggest concern. Severe vision loss has also a high economic impact, as a study by Wittenborn & Klein in 2013 stated. They concluded that the total economic burden in 2013 was as high as $139 bn for the USA alone. Welp et al elaborated in their 2016 book, naming a plethora of factors for the high cost ranging from direct medical expenses, loss of productivity and other indirect costs such as dependence, mobility, falls & subsequent injuries and mental health.

Most causes for irreversible blindness can be traced back to retinal diseases. In a recent study, Yan et al analyzed the transcriptomes of ~85,000 retinal tissue cells via single-cell RNA-sequencing. The resulting cell atlas of the retina, a thin layered tissue at the back of the eye, describes a fantastically intricate and interconnected network composed of at least 58 different cell types across 6 classes. Identified cells include non-neuronal cells, sensory cells such as photoreceptors, other neuronal cells and various sub-types of the all-important retinal ganglion cells (RGCs) at the base. 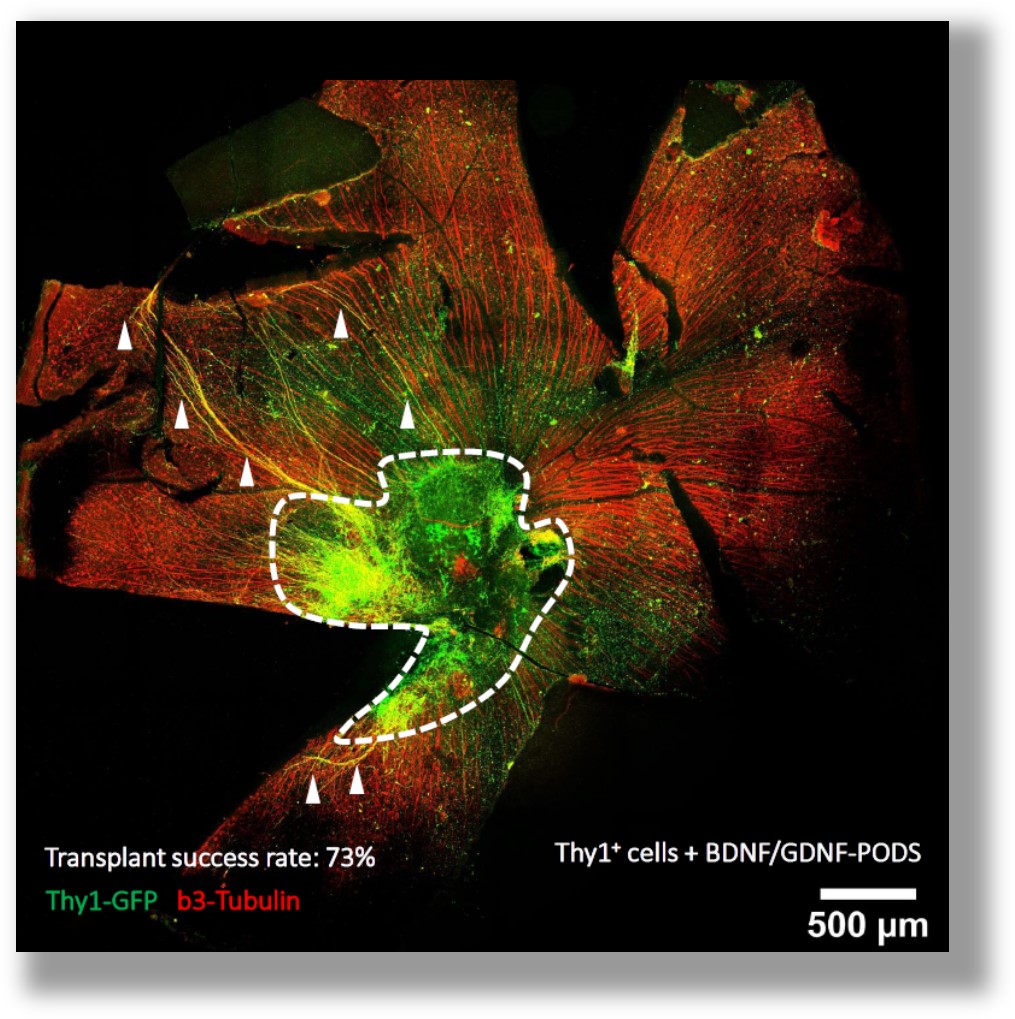 The identification and classification of the specialized cells resident in the retinal ganglion layer is ongoing with current counts ranging between 30-40 RGC subtypes. They share not only characteristics and but also the ultimate goal of bundling all the visual information collected by the sensory cells in the upper layers of the retina, processing them and finally relaying the electrical signals through the optic nerve to the brain.

Leading causes for damage to retinal cells, which in turn results in loss of RGCs, include genetic predisposition, intra ocular pressure (IOP) and glaucoma. To date, effective – in other words vision-saving – treatments only exist for IOP. However, as more advanced regenerative technologies have emerged over the last 10-15 years, efforts to widen therapeutic options have increased including gene therapy, neuroprotection and cell replacement.

The simplest route to successfully restoring and maintaining vision in many ways seemed to be retinal neuroprotection, or preservation of the function of existing RGCs, by i) changing the biochemical and cellular events causing damage to the issue; or ii) activating and boosting the inherent regenerative functions. However, previous efforts have been fraught with failures to translate promising in vitro compounds into effective therapies, tainting the entire approach. Perhaps the most costly of them, literally and figuratively speaking, was the 9 year-long phase III clinical trial of the compound memantine that came to an unsuccessful end in 2008 at a cost upwards of $80 million.

More recent neuroprotection studies that are addressing the dysfunction of Müller cells, neuronal helper cells in the upper layer of the retina, by utilizing the growth factor ciliary neurotrophic factor (CNTF) have been more successful. First, a phase I trial provided evidence of both the safety of the intraocular implant and an improved visual acuity over a 4 year follow-up. Then, a more recent phase II study of the NT-501 implant, a semipermeable membrane capsule that encases CNTF-releasing cells, built upon those findings by showing a slowing of the progression of retinal degeneration. A cell-free option to locally deliver CNTF for long periods of time is Cell Guidance Systems’ PODS® CNTF from its sustained-release growth factor range PODS®. The advantages of implanting fully defined synthetic protein co-crystals that can release a singular active ingredient (rather than cells secreting a complex mixture of growth factors in addition to CNTF) is clear.

The other area of intense research activity for vision restoration is cell replacement therapy including the use of stem cell-derived retinal progenitor cells. Almost 10 years ago, Eiraku & Sasai published their seminal paper describing a method to differentiate mouse embryonic stem cells (mESCs) into cell aggregates expressing cell markers consistent with RGCs. While progress has been made since then, including generating 3D structures towards the goal of creating physiologically-competent 3-D retina organoids, major challenges still exist such as complexity of ESC/iPSC differentiation process, lack of scale and issues around transplanting cells generated in the lab into the retina of patients, either as single cells or as cell sheets.

Progress on the latter, transplantation into retinas, was reported by Oswald et al in a recent publication. Their study examined the integration rate and long-term survival of transplanted mESC/miPSC-derived RGCs into glaucomatous mouse retinas in order to replace damaged or apoptotic ganglion cells. While improving on previous numbers substantially, >5-fold on both accounts, the overall survival rate of transplanted cells after 12 months of just 5% suggests additional support for the cells post transplantation is needed.

To tackle issues around complexity of differentiation and scale, modifications to existing cell manufacturing methods such as using media formulations with sustained-release growth factors could provide key. Early data suggests utilizing PODS® BNDF and PODS® GDNF during the retinal maturation stage could not only improve RGC yield but will also reduce the number of interventions during culture. Furthermore, continuous provision of neurotrophic growth factor post cell-transplantation may even increase cell survival rate as well as further improve neuronal maturation in situ as exemplified by a pronounced axonal outgrowth.