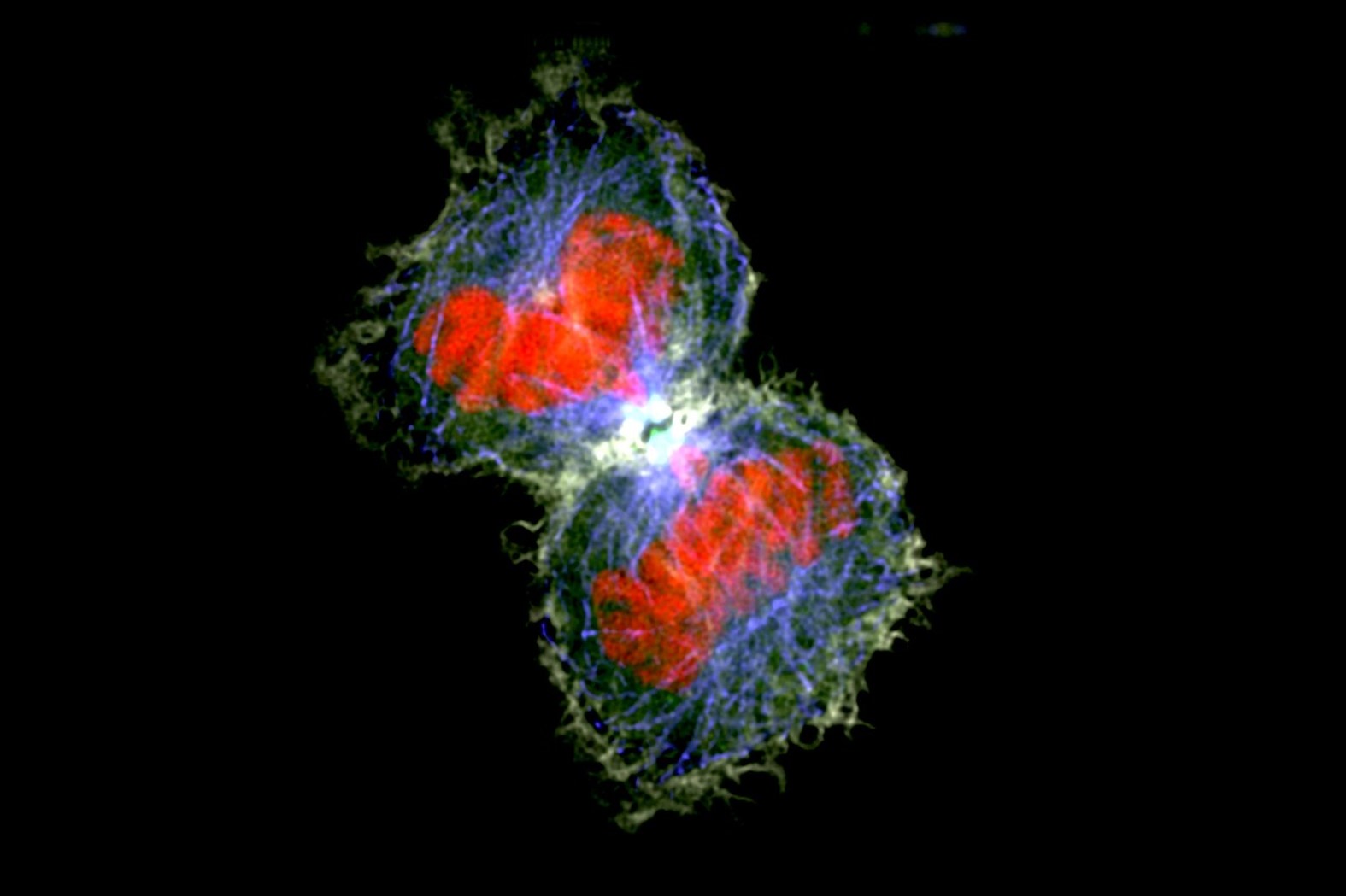 More than any other disease, the complexity of cancer has frustrated the development of effective therapeutics. The varying and evolving landscape of genetic changes between and within tumors and the complex interaction of the cancer cells with the immune system make this disease extremely difficult to simulate. A range of models now exists that better replicate cancers complexity.

Cancer cell lines cultured in a 2D monolayer remain the most widely used model of cancer. Cancer cells lines (such as HeLa, shown above) can be cultured indefinitely and, particularly in the early stages of drug development, can be used to create high-throughput screening assays.  However, 2D cell culture provides an over-simplified model: solid tumours are a dynamic mix of cancer cells, immune cells, stromal cells in an extracellular matrix which together form a tumor microenvironment (TME). Even within a tumor, the TME can be highly heterogeneous with uneven infiltration of immune cells and an ever-changing genetic landscape of the cancer cells.

Tumour spheroids move the model dial a little on 2D culture by providing a 3D structure in which cancer cells are not forced onto rigid structures affecting their behaviour. Tumor spheroids can be used in high throughput experiments that better mimic the 3D nature of cancers. However, tumor spheroids still rely on cancer cell lines which lack the heterogeneity and complexity of tumors.

Patient-derived organoids (PDOs) are made from resected tumors which are enzymatically digested to release cancer cells. These cells are cultured, short-term, and mixed with a basement membrane material that allows them to form 3D structures that more closely resemble tumors than spheroids. PDOs are more heterogeneous than spheroids but lack the immune cells and stromal cells of tumors they were derived from.

Limiting the amount of manipulation of a sample following resection is key to modelling real tumor behaviour. Precision-cut tumor slices (PCTS) is an ex-vivo model that uses freshly-derived tumor material which, following resection, is minimally manipulated. First the sample is embedded in a collagen gel to provide support. A rapidly vibrating blade is used to cut the tumor into thin sections. The vibration of the blade reduces damage to the cells compared to conventional static blades used in microtomes. PCTS can be cultured for over a week and retain much of the complexity of the original tumor including the immune and stromal cells and the heterogeneity allowing for study of the immune landscape. Dozens of slices can be obtained from a single tumor sample (which is typically obtained as surplus to diagnostic requirements).

PCTS still have significant limitations. For example, the slices must be used immediately and can’t yet be frozen (although this limitation may be addressed in future) and the technique is relatively low throughput reducing the potential for drug screening. Moreover, PCTS no longer have tumor-infiltrating immune cells constantly arriving. However, the utility of the PCTS model is a leap forward for studies of cancer. In particular, its utility for better understanding immunomodulating agents has already been highlighted by a plethora of studies looking at different aspects of immuno-oncology (reviewed here).

Mice have played an essential role in the development of cancer drugs. Mouse models use a variety of approaches including transplanted cancer cells, and chemical induction of tumors or mice that are genetically engineered to be pre-disposed to developing cancers. Often immunocompromised mice are used which allow xenotransplantation of human cells without basic rejection by the mouse’s immune system. Syngeneic, immunocompetent preclinical mouse models where the tumor and mouse host have the same genetic background, have been particularly important for the development of novel immunotherapies.

Patient-derived xenograft models (PDX) use patient-derived material that is implanted into immune-deficient mice. These more closely retain the phenotypic characteristics of the original tumor. However, PDXs lack a functional immune system and are very limited in throughput.

Ultimately, the goal of any disease model is to predict what will happen in the real world and each model has limitations. It is hoped that better models will lead to a reduction in drug development costs. The biggest cost of drug development comes from late-stage failures. Drugs often fail in clinical trials because pre-clinical models fail to adequately capture disease complexity. According to a 2020 report by the London School of Economics, the average cost of bringing a new drug to market between 2009 and 2018 was $1.3 billion. The report found that the cost varied across disease areas with cancer being the most expensive. This likely reflects the difficulty of accurately modelling cancer.

PCTS can be further improved by the use of cytokines which act as survival agents to improve the viability and health of cells as they adapt to new conditions. PODS technology provides sustained availability of growth factors, and PODS growth factors have been show to significantly improve cell health in transplanted cells. They may also be expected to improve the performance of PCTS models.