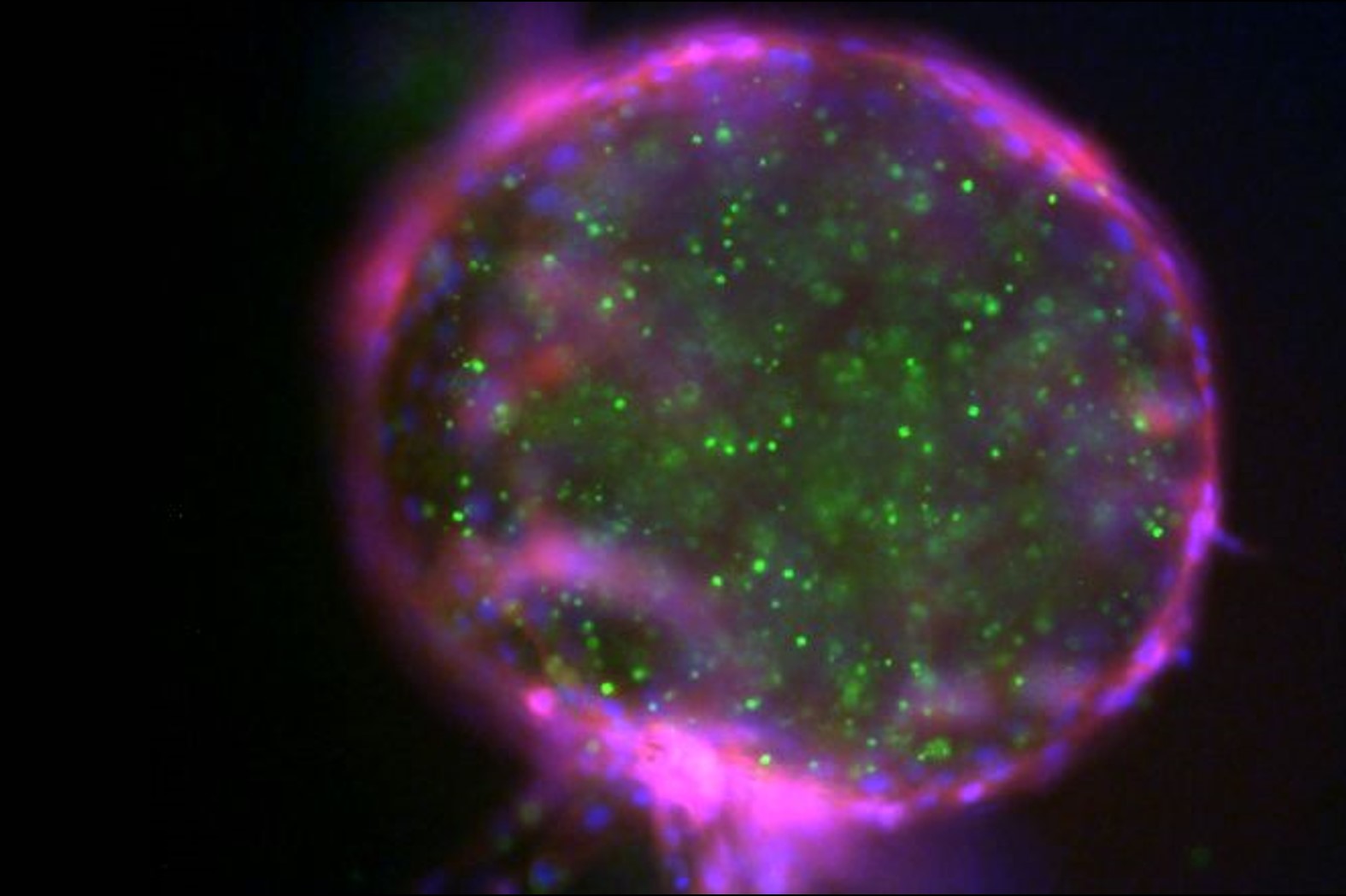 Green fluorescent protein (GFP) was isolated from the jellyfish Aequorea victoria in the early 1960s. On its way to earning Osamu Shimomura, Martin Chalfie and Roger Tsien a Nobel prize in 2008, this protein and variants derived from it have illuminated countless scientific explorations and shed light on many previously dark secrets of biology, proving almost indispensable in life science research. A plethora of variants and new fluorescent proteins are building on the legacy of this versatile molecular biology tool.

GFP is a 27 kD peptide that serves as the ultimate light emitter in Aequorea victoria’s bioluminescence reaction. Using genetic engineering strategies, a large number of "enhanced" genetic variants with varying colours, fluorescence emission profiles and stability have been created, thereby increasing the utility of fluorescence proteins in various applications.

Cell Guidance Systems has developed heat resilient PODS crystals containing GFP which are readily taken up by phagocytic cells and incorporated into hydrogels and other biomaterials (see image above). These GFP co-crystals are stable over a period of several months.

One of the most widely used variants, Enhanced GFP (EGFP) is 35 times brighter than GFP. The Emerald variant also offers distinct advantages for photostability and brightness, but a lack of commercial sources has limited its use.

Mutagenesis of the Tyr66 residue in the native GFP fluorophore generated blue and cyan fluorescent proteins. Both of these proteins have proven utility in applications such as multicolour labelling and FRET (fluorescence resonance energy transfer). However, despite being most efficient in the not commonly used spectral regions, both of these probes are more weakly fluorescent—with their enhanced versions (EBFP and ECFP) only 25-40% as bright as eGFP.

The majority of the developmental research in this class has been focused on cyan variants, as BFP is photobleached rapidly and is dimly fluorescent in vitro and in vivo. Among the improved CFPs that have been introduced, brighter variants such as SCFP and mTurquoise show the most promise by exhibiting a high-fluorescence quantum yield, long fluorescence lifetime, resistance to photobleaching and higher extinction coefficients.

Despite the wide variety of GFP, BFP and CFP that have been characterised, deep-tissue imaging of living cells is still confounded by several limitations. One approach would be continued engineering of fluorescent proteins with emission maxima in the near-infrared range (>650 nm)—instead of the visible range (400–650 nm)— for lower background fluorescence, reduced toxicity and deeper tissue penetration.

The most useful of these newly characterised fluorescent proteins is the fascinating red fluorescent protein (RFP) derived from the coral Discosoma. With its orange-red fluorescence, DsRed (500-583 nm) possesses spectral and structural properties that are ideal for a potential FRET partner and/or to compliment dual-colour experiments with GFP and its variants. One study also shows the better suitability of DsRed to EGFP for optical in vivo imaging approaches.

Slow maturation period, rapid photobleaching and poor solubility issues with DsRed have proven problematic for multiple labelling experiments because of the large spectral overlap. However, the tremendous interest in RFP has generated a wide variety of optimised variants, such as the RedStar, mRuby3, mScarlet, etc.

Additionally, detailed studies of RFPs’ chromophore and its protonation/deprotonation chemistry along the way has motivated the pursuit of a variety of fluorescent proteins with spectral properties near-infrared range. The family of red-shifted fluorescent protein—namely yellow (YFP), orange (OFP) and far-red fluorescent protein variants—are now in high demand as protein tags for multicolour microscopy and advanced in vivo imaging applications.

CFP and YFP (520-540 nm) are commonly used as donor-acceptor pairs for multicolour imaging experiments and FRET applications. However, the slow maturation time and high sensitivity to pH/chloride ions of YFP highly limit its use. Further refinements have led to the development of YFP variants with reduced chloride sensitivity, faster maturation and increased brightness—such as the enhanced yellow fluorescent protein (EYFP), Citrine, and Venus.

Another variant to fill the spectral gaps between YFPs and RFPs include the OFP. mOrange—the first OFP derived from DsRed-Express2—serves as one of the most attractive acceptor candidates for FRET due to its optimal excitation wavelengths and emission ranges for robust signal collection. More recent innovations shown to exhibit a higher rate and improved efficiency of photoconversio include the LSSmOrange, PSmOrange and PSmOrange2 variants.

Recently, the exciting discovery of novel types of fluorescent proteins in vertebrates—such as the UnaG and Sandercyanin isolated from eel and yellow fish, respectively—has led to novel evolutionary insights in the field of fluorescent proteins. The identification of bright green fluorescent metabolites in shark skin has also opened new avenues of inquiry into their roles in central nervous system function, photoprotection and resilience to microbial infections.

The recent explosion in the diversity of available fluorescent proteins can make it difficult for scientists to select the appropriate choice for a specific experiment. Although a trial-and-error approach may still be necessary, scientists could narrow down the options by looking into the available studies—or make use of the online database available at https://www.fpbase.org/. A general guide to fluorescent protein pairs for FRET experiments can also be found in this paper.