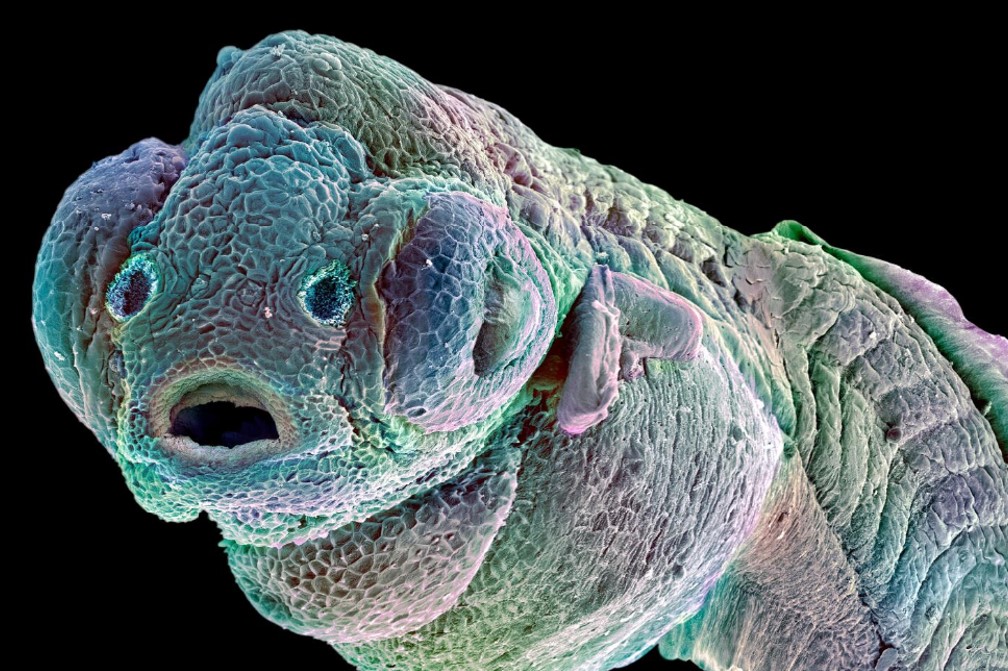 The development of complex multicellular forms, such as this zebrafish embryo, relies on the activity of morphogen gradients acting differentially on individual cell surface receptors. The way receptors and their ligands present themselves to each other, either dispersed or in clusters, has a dramatic impact on the consequences of their interaction.

Receptor proteins have three domains: extracellular, intracellular and membrane-spanning. The binding of ligands to the extracellular domain induces changes in the conformation of the intracellular domain which sets off a chain of biochemical reactions, such as protein phosphorylation, ultimately leading to changes in the transcriptional profile and behaviour of a cell. Ligand bound receptors can also be endocytosed; translocating to an internal compartment of the cell where they elicit an effect.

The cell surface is a dynamic environment with constant changes and movement of component parts. Membrane-bound protein receptors can rapidly migrate from diffuse formations to discreet clusters, sometimes held in lipid rafts. This receptor clustering has a direct impact on downstream effects. Whilst receptors may cluster independent of the mode of ligand presentation, the clustering of their ligand molecules on support matrices can also lead to receptor clustering. The phenomenon of receptor/ligand clustering is not restricted to morphogens and is widespread across nature.

Morphogens and other growth factor ligands may be tethered to a component of the extracellular matrix or the surface of a cell. Growth factor receptor clustering has been closely studied in the Ephrin family of receptor tyrosine kinases which consists of 14 members. The binding of different combinations of five Ephrin A and three Ephrin B ligands to these receptors mediates changes in cellular shape, motility, migration and proliferation. Ephrin ligands are commonly presented to receptors from the surface of expressing cells. Notably, as well as a trans “forward signal” transduced by the cell bearing receptors, a cis “reverse signal” is effected back into the ligand presenting cell upon ligand binding to receptors. In other words, the cell generating the ligand is also stimulated when binding to the receptor on another cell. 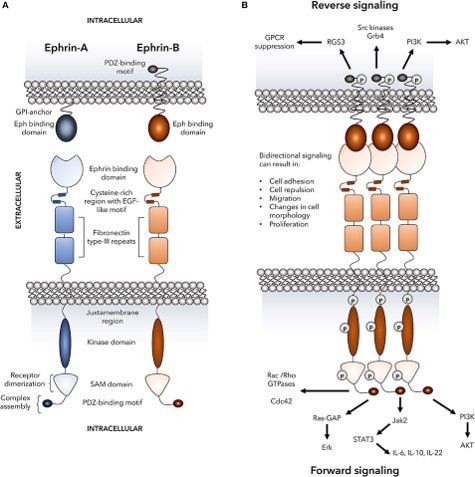 The impact of receptor binding on cell behaviour is highly context-dependent. Spatial and temporal expression patterns are important. Clustering of Ephrin receptors leads to cross phosphorylation of tyrosine residues and amplification of downstream signalling. As well as enabling cross-phosphorylation by moving receptors closer together, ligand tethering increases the avidity of the ligand-tether complex. This avidity rapidly rises as a function of valency. For receptors of growth factors, such as IL-2R, that are internalized, there is evidence that clustering facilitates endocytosis.

As well as biological (e.g. extracellular matrix components, cell surfaces and exosomes), synthetic (e.g. hyaluronic acid, nanoparticles) support tethers displaying ligand clusters can generate significant increases in potency.  Researchers at Berkeley University in California studied the effect of conjugating Ephrins and Sonic Hedgehog (SHH) ligands onto a hyaluronic acid (HA) backbone to produce a linear structure resembling beads on a string. As the number of ligands attached to each HA tether increased, so did the potency of each individual SHH or Ephrin molecule. Remarkably, at the highest valency tested of 1HA:22Ephrin-B2, similar levels of bioactivity were induced by 37-fold lower amounts compared to unconjugated Ephrin-B2. Tethering of SHH to HA produces a similar amplification effect.

Interestingly, the levels of bioactivity (e.g. maximal proliferation rates) that can be achieved may be significantly higher with the tethered ligands: No matter how much free SHH is added, these higher rates cannot be achieved. To coin a phrase, it seems these morphogen clusters reach parts of the cell that other morphogens cannot reach. As a result of their increased potency, clustered ligands have significant therapeutic potential. This has been demonstrated using in-vivo models of diabetic wound healing.

Could knowledge about tethering be used to generate better growth factors for research, biomanufacturing and therapeutic applications?  HA conjugates have not yet reached the market and may be difficult to scale and produce reliably. However, there is evidence that clusters of ligands can be generated on the surface of exosomes thereby increasing their potency. So perhaps exosomes could provide a more tractable option?  The use of exosomes as therapeutics is being explored in many labs. Given an increased understanding of the benefits of clustering, it may be useful to determine optimal ratios of exosome to ligand valency to maximize the potential contribution of tethering and clustering.