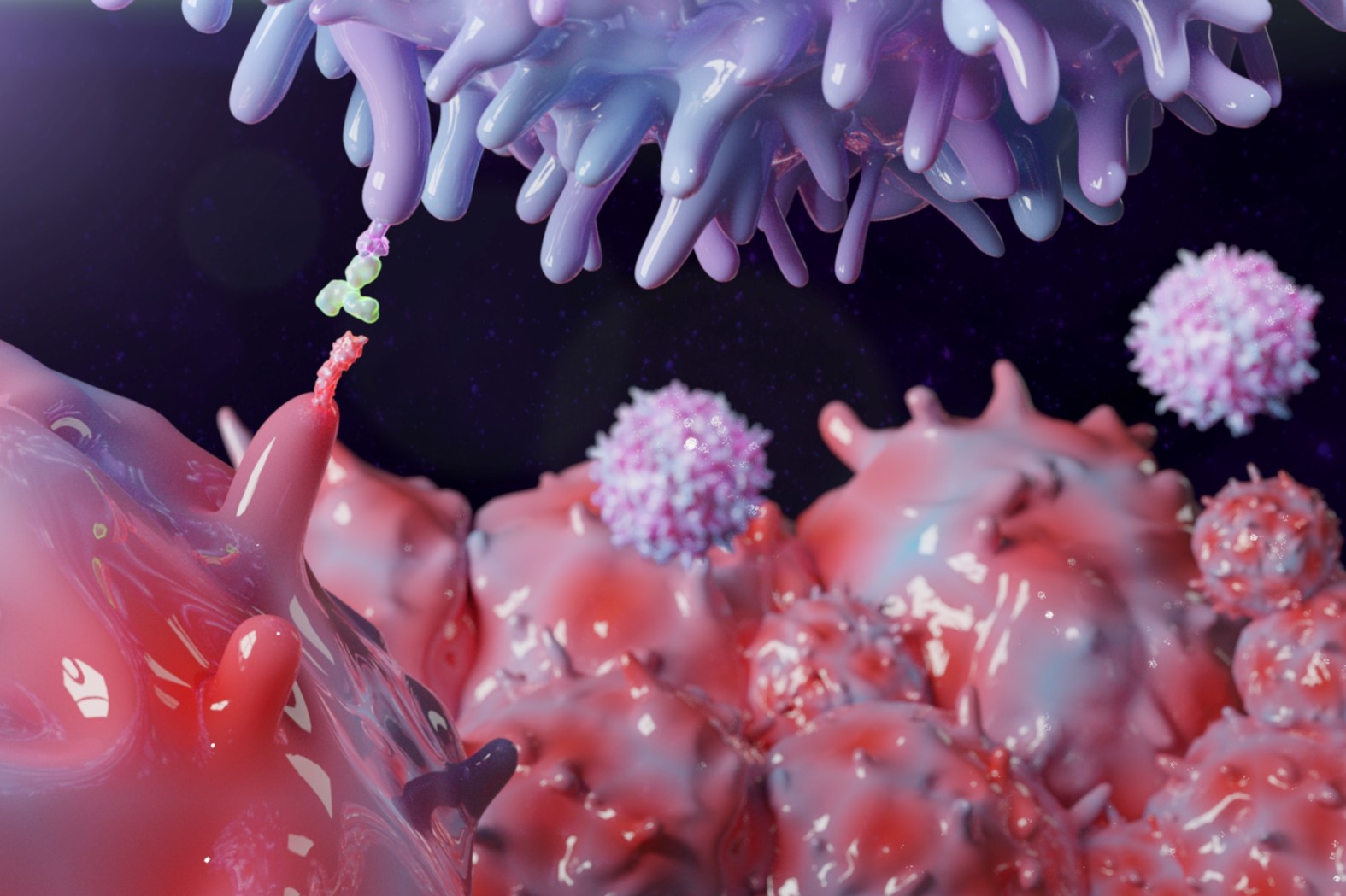 Since the 1986 approval of Muromonab, the first therapeutic monoclonal antibody (mAb), used to treat steroid-resistant transplant patients, mAbs have rapidly evolved and gained clinical ground to become the largest class of biopharmaceuticals. During this period, mAbs have garnered a reputation for safety, favourable PKPD, and high levels of specificity that have made them a preferred drug modality in many therapeutic applications.

Currently, there are over 100 mAbs and mAb-derivatives approved for disease therapy. This trend is set to continue, with evolving mAb formats and modifications constantly being developed to further enhance their pre-eminence.

One of the fundamental challenges to antibody therapy is an immune reaction elicited by non-human sequences within the non-variable regions. Increasingly humanized antibodies are generated for therapeutic use by combining the variable domains of non-human species that recognise a human antigen of interest with the constant domains of human antibodies. Although some humanized and even fully human sequence-derived antibody molecules still carry immunological risk, it is much lower compared to the mouse or chimeric antibodies.

The Y-shaped structure of antibodies has become very familiar:  Papain digestion of whole antibodies generates two F(ab) fragments (~50 kDa) and an Fc fragment. Each F(ab) fragment is composed of one constant and one variable domain of the heavy (VH) and the light chain (VL) of antibodies, with no Fc portion. These monovalent fragments are powerful tools for various diagnostic and therapeutic uses. In contrast, pepsin digestion of a whole antibody will yield a divalent F(ab')2 fragment that has two F(ab) portions linked together by the hinge region of Fc.

From these basic elements, new antibody formats have been engineered. A single-chain variable fragment (scFv) is a type of fusion protein composed of the VH and VL regions fused via a flexible peptide linker usually 10-25 amino acids long and rich in glycine for flexibility, as well as serine/threonine for solubility. scFv is only half the size of the F(ab) fragment, yet it retains the original specificity of the parent Ig. Divalent, dimeric (diabodies), trimers and/or tetrabodies can also be engineered by linking together two or more scFvs. When compared to their corresponding scFvs, they exhibit much higher affinity to their target due to slower dissociation kinetics and an improved affinity for hapten.

Smaller antibody fragments generally offer advantages over conventional antibodies, including ease of manufacture, improved access to challenging epitopes, higher cellular or tissue penetration/uptake and reduced immunogenicity. Notably, these fragments can be used on their own or linked to other molecules/fragments to generate bispecific, multi-specific, multimeric or multifunctional antibody formats that can offer context-dependent improvements to conventional full-sized mAbs and small mAb fragments. For example, linking two scFvs with specificity for two different antigens yields bispecific antibodies (BsAbs) with dual-specificity in their binding arms. Further development of BsAbs leads to bispecific T-cell engagers (BiTEs) that form a link between cytotoxic T cells and tumour cells to direct the host’s T cells' cytotoxic activity against cancer cells. 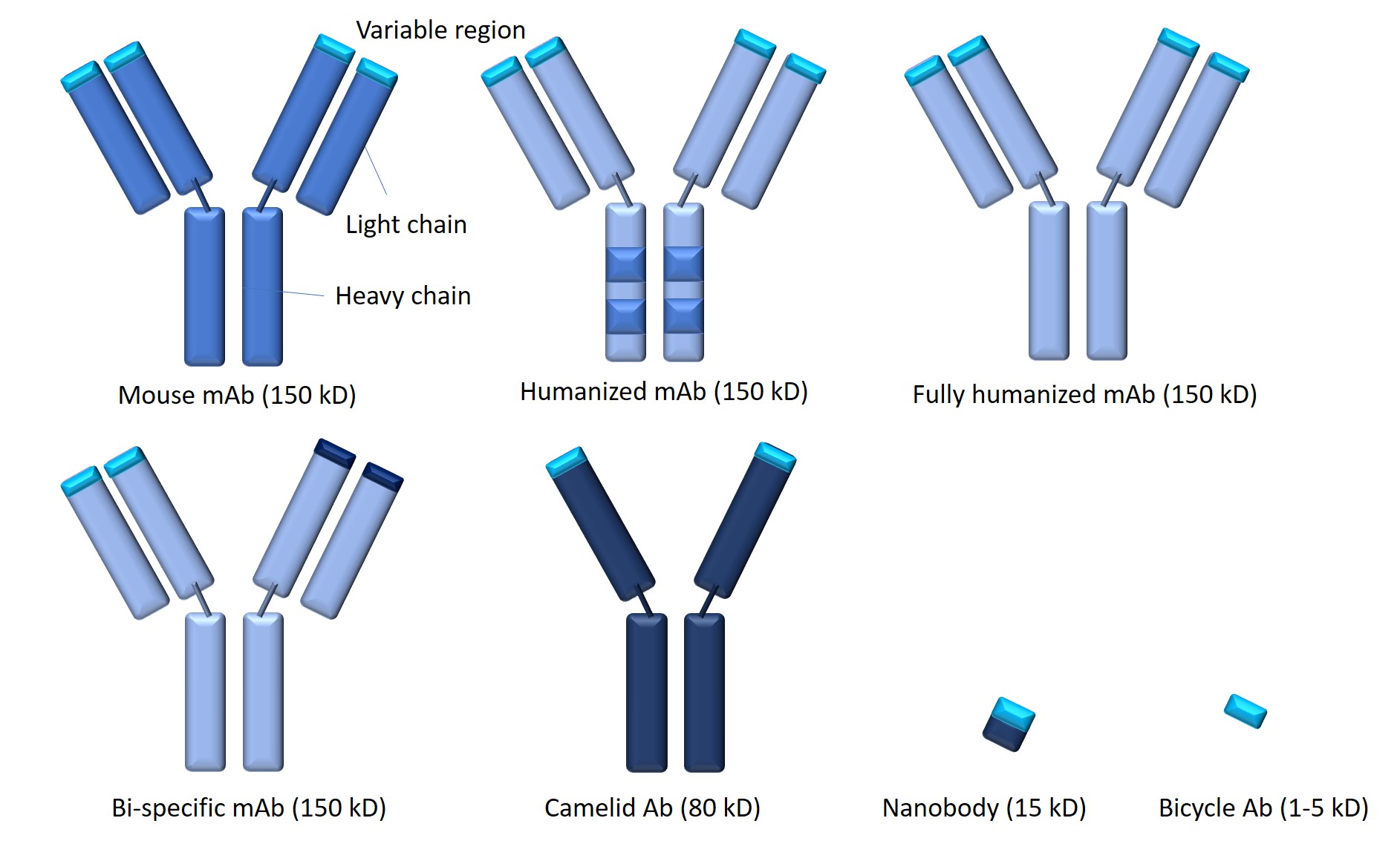 The serendipitous discovery in 1989 of heavy-chain only antibodies (HcAbs) in llamas and other camelid species. Although camelids consist of just two heavy chains and a single camelid variable domain (VHH) as the antigen-binding region, they retain full antigen-binding potential upon isolation. The discovery of camelids sparked decades of innovation leading to tiny antibodies termed ‘nanobodies.’ Advantageous features of nanobodies include their small size (15 kDa), high solubility and excellent tissue penetration. Nanobodies can readily be linked genetically to Fc-domains, other nanobodies, peptide tags or toxins—and can be conjugated at a specific site to drugs, radionuclides, photosensitizers and nanoparticles for applications across various diagnostic and therapeutic fields.

Despite the great progress over the last four decades, challenges remain: the use of animal-derived therapeutic antibodies for humans is limited by a short serum half-life, particularly for the small variants such as nanobodies, and the inherent hydrophobic interaction of VH-VL domains that often causes aggregation-induced immunogenicity and/or mispairing of V-domains across species barriers. It is perhaps surprising how little the methodology that has developed over the years actually involves humans. There remains a need for new antibody formats combined with effective delivery mechanisms that will together provide the same binding specificity of mAbs—but with better in vivo stability and pharmacodynamics.

More recently, as the trend in targeted drug delivery moves towards the use of smaller and highly specific molecules, classical mAb therapeutics and their derivatives (ADCs, etc.) are now being challenged by the development of equally potent molecules named ‘non-antibody scaffolds.’ The term describes a multifaceted group of compact and stably folded proteins—differing in size, structure and origin—that serve as binding reagents with specificities and affinities in a range that was previously considered unique to antibodies. In contrast to antibodies, scaffold-based platforms provide a much smaller, robust and conserved structural framework to support recombinant gene expression, construction of bifunctional fusion proteins, better tissue penetration in vivo, and many more attributes.

Over the past decade, a large number of pharmaceutical companies have invested significantly in protein scaffold technologies. A large number of candidates derived from these scaffolds are currently under academic, preclinical and clinical development and have shown great potential in terms of affinity, target neutralization and stability. Among them, the development of bicyclic peptides, or Bicycles®. These short peptides form stable cyclic structures with the help of a non-peptide scaffold staple. Bicycles offer high levels of stability, specificity and the ability to penetrate cells.

Despite the considerable promise of non-antibody scaffolds, their evolution from innovative binding moieties to potential drug candidates remains challenging, mainly due to increasing requirements for regulatory approval. For example, one such requirement is the ability to match—or even exceed—potencies that can be achieved by traditional mAbs. As this relies on in vitro techniques, advanced formulation and delivery technology for the specific tailoring of various molecular properties in addition to target affinity/specificity will ultimately justify their use as a true alternative to antibody-based therapeutics.