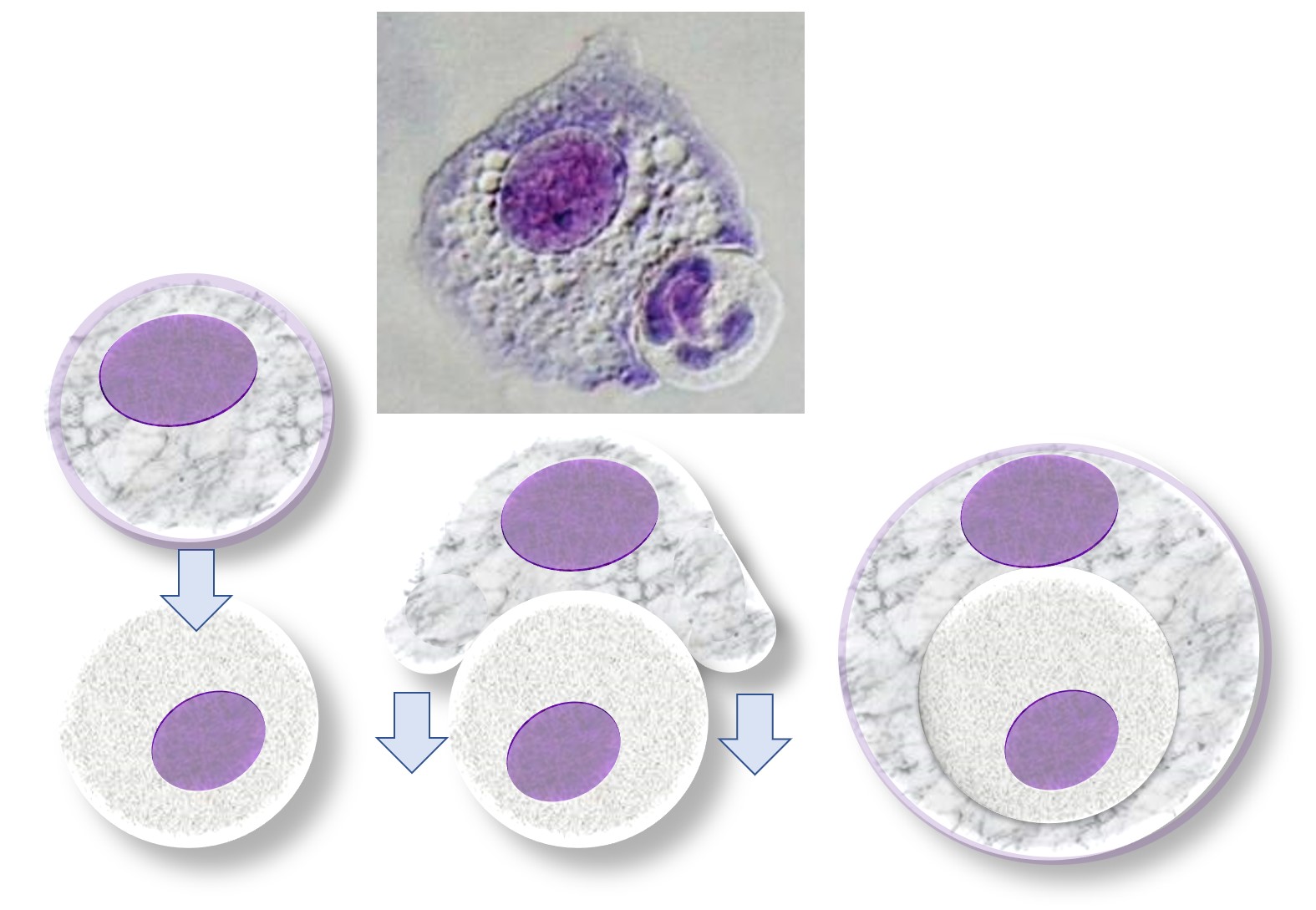 Cells constantly exchange material with their surroundings. At one end of the ingestion scale, nutrients are adsorbed by mechanisms such as endocytosis. At the other end, entire cells can be swallowed by another cell. Terms such as entosis, emperitosis, phagoptosis and, simply, cannibalism, describe these fascinating phenomena.

Clearance of cellular debris resulting from cell death is an important part of the body’s protective immune response to invading pathogens. It is carried out by many types of different cells and involves the ingestion of materials or dead cells by other cells, generically referred to as phagocytosis. Cells are referred to as professional or non-professional phagocytes, dependent on the efficiency of their activity. There is evidence that all cells are capable of some degree of phagocytic activity.

The majority of professional phagocytes are bonemarrow-derived white blood cells. These include neutrophils, monocytes and macrophages. As well as dealing with invading pathogens, these cells' main job is to clear other cells that are dead or dying, usually due to necrosis following cell infection or apoptosis where internal signalling pathways cause a cell to die in a controlled manner.

In addition to professional phagocytes, non-professional phagocytes with specific functions are found throughout the organs and tissues of the body. Examples range from liver cells clearing debris circulating in blood through to Sertoli cells in the seminiferous tubules of the testes which remove aberrant sperm cells. In most cases, target cells trigger their own clearance by exposing ‘eat-me’ signals such as phosphatidylserine which activates receptors on phagocytic cells leading to ingestion. These processes are the body’s response to maintaining a healthy physiological environment.

Ingestion of cells has also been observed with cancer cells. These ‘cell-in-cell’ phenomena occur by two independent mechanisms: the primary mechanism is the active engulfment of surrounding cells by the cancer cell itself (referred to as cannibalism). It differs to normal phagocytosis as it involves the ingestion of live cells as well as dead ones. It usually targets other cancer cells but can equally involve normal cell types. It is seen at a particularly high frequency in metastatic cancer cells.

Metastatic melanoma cells, for example, have been observed to ingest live lymphocytes. Interestingly, these cannibalistic cells were still able to survive when deprived of essential nutrients in the culture medium whereas the same cells “fed” latex beads, with no nutritional benefit, died. Cancer cells often exist in a nutrient-poor environment due to a reduction in the tumour blood supply, so it appears this “feeding” behaviour enables the cancer cell to obtain nutrients important for its survival. This behaviour is a marker of malignancy.

Another cell-on-cell process, known as entosis, involves cellular invasion. Following cell-to-cell contact, there is polymerisation of the invading cell’s actin along with myosin contraction. This increases the cell’s mechanical tension and stiffness, prompting the cell to move inside the contacted cell. In some instances, this has an immune-protective role for the body. For example, natural killer (NK) cells are able to attack tumour cells by directly inserting into the target cell causing death by disrupting the cell cycle. Additionally, during metastasis, cells which detach from the extra-cellular matrix are induced to become entotic and enter nearby cells resulting in their death. These mechanisms are thought to aid the suppression of tumour growth.

However, in a cruel twist, entosis has been subverted by cancer cells to their advantage. By their very nature, cancer cells have lower mechanical tension and increased flexibility. This can induce entosis in surrounding cells and their entry into the cancer cells. Rather than being deleterious to the cancer cell, the invading cell dies imparting its nutrients through a breakdown in the lysosomal pathway.

Cancer cells can avoid being killed by NK cells enveloping the immune cell within its cellular vacuole neutralising its attacking ability. The NK cell then undergoes death by apoptosis, a process called “emperitosis”. Furthermore, as cell entry can cause chromosomal abnormalities (aneuploidy) by disrupting cell division, this promotes cancer cell progression. Cellular invasion in these ways gives the invaded cancer cell an additional metabolic advantage as the majority of the energy demands is provided by the invader which, alongside the provision of nutrients, has a tumour-promoting effect.

Another similar process called phagoptosis (derived from phagocytosis and apoptosis) has also come to light. This occurs during normal turnover and maintenance of immune cells and notably involves the ingestion of live cells. Interestingly, this mechanism of cell ingestion may be important for new approaches to treating cancer. Like other forms of ingestion, it is determined by the balance of “eat-me” versus “don’t eat me” signals. Cancer cells avoid being ingested by actively displaying “don’t eat me” signals, the most well-known being the cell surface protein CD47. Elevating levels of this protein increase the tumorigenicity of the cells whilst reducing ingestion by macrophages. Conversely, if this signal protein is blocked, there is a relative increase of “eat-me” signals leading to ingestion by macrophages and clearance of the cancerous cells.

These observations have led to the development of novel approaches to combat cancer. As outlined in a previous blog, exosomes could be used to deliver anti-tumour drugs. Exploiting this mechanism for therapy would benefit from an improved understanding of exosome ingestion by cancer cells. Equally, promoting the ingestion of large numbers of inert nanomaterials which could outcompete uptake of other cellular materials would deny cancer cells the nutrition they require resulting in their death.