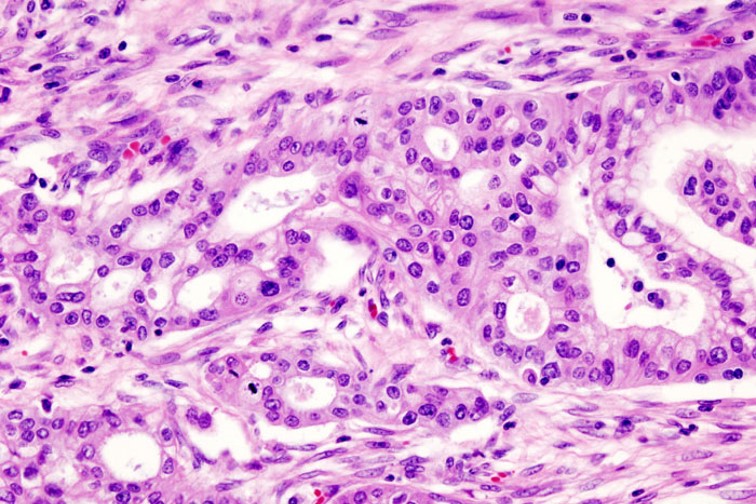 Great strides have been made in recent years in treating some cancers, such as melanoma. But despite huge efforts, little progress has been made in improving the odds for pancreatic ductal adenocarcinoma (PDAC). 95% of individuals receiving a diagnosis of PDAC survive less than 18 months. It is the worst prognosis of any cancer, making it set to be the second biggest cause of cancer mortality by 2030. Why is PDAC so difficult to treat and what strategies are being developed?

As noted previously, a simple cut and paste of treatments effective in other cancers have had very limited success in PDAC. This cancer has a poor prognosis for two key reasons: Firstly, PDAC is asymptomatic in the early stages leading to late diagnosis. Clearly, the development of screening programs able to detect PDAC at an early stage is important. Secondly, the tumour microenvironment (TME) is particularly immunosuppressive with a dense fibrotic structure.

One of the unique aspects of PDACs is the presence of pancreatic stellate cells (PSCs). These cells normally secrete much of the extracellular matrix found in the pancreas. But in various diseases of the pancreas, PSCs are the main drivers of fibrosis. This process generates a dense meshwork of fibrotic and desmoplastic stroma which is difficult for drugs to permeate.  The stromal remodelling by PSCs also upregulates tumour-associated macrophages (TAMs) which have been implicated in ductal metaplasia contributing to PDAC development.

Many of the immune cells such as CD8+ T cells which are mobilized against cancers are almost absent in PDACs. These are kept out of Kras-dependent PDACs by the activity of immunosuppressive myeloid cells recruited by the cancer. Neutrophils are also depleted.

Strong experimental evidence links the role of PSCs to the poor immune environment. In mice injected with either pancreatic cancer cells alone, or in combination with PSCs, very different immune cell profiles develop with a much more immunosuppressive environment (e.g., more M2 macrophages, fewer activated T cells) associated with the presence of PSCs.

PDACs also have a disorganized vasculature which leads to high interstitial pressure, low pH and hypoxia. These physical factors hinder the function of immune cells. Consequently, any immune cells present in large numbers, such as TAMs, are either subverted to be pro-tumorigenic or operate in a hostile physical environment.

In other cancers, it has been possible to use drugs such as high-dose IL-2, CD47 inhibitors and checkpoint inhibitors to boost immune cell activity. But in PDAC, the thicket of fibrotic material prevents the effective delivery of drugs that might help to redress the balance of power within the TME. What are the therapeutic approaches tailored to PDAC being developed to address the unique challenge it poses?

Rather than treating the cancer cells themselves, one strategy is to deplete the M2 TAMs that orchestrate PDAC’s misfiring immune response. TAMs are continuously recruited from blood as progenitor monocytes.  Once in the cancer, they have a life span of a couple of weeks. Turning off the supply of new TAMs might be achieved by simply blocking the signalling used by the tumour.  For example, antibodies that bind to the chemotactic CSF1, CCR1, CXCR2 and CXCR4 receptors on monocytes have been evaluated in combination with chemotherapy.

Conventional cytokines, such as high-dose IL-2 used for melanoma and renal cell cancer, and immunotherapy have not been useful to treat PDAC. Even in tumours where the clinical benefit is clear, these drugs have sub-optimal distribution with high levels of toxicity and adverse events. The dense stroma of PDACs may obliterate the small therapeutic window in which these drugs operate. Great efforts are being made to improve the PKPD of immunomodulatory drugs such as IL-2 and  IL-15.  By improving their stability and providing targeting to specific tissues and receptors, these drugs may start to become effective in treating PDAC.

Another strategy is the use of enzymes to loosen the dense stroma. Sperm Adhesion Molecule 1 (SPAM1) is a human protein that degrades hyaluronidase. It is found on the surface of sperm molecules allowing them to fuse with the egg by breaking down the hyaluronic acid-rich cumulus cell layer. Although animal studies showed promise, improving the TME and enabling access by other drugs as hope, a large multicentre phase III clinical trial for SPAM1 stabilized by pegylation (PEGPH20) in PDAC, administered intravenously,  failed to impress.  This result ended clinical interest in PEGPH20. However, the success in animal models may yet still indicate the basic potential of SPAM1. Better formulations of SPAM1, beyond simple PEGylation, may be better able to treat larger human tumours.

The importance of the gut microbiome on the course of disease and response to therapy is well established. Microbes in the gut can secrete compounds that have an effect on cancer. For example, some bacteria secrete testosterone which promotes the growth of prostate cancer. Other gut bacteria can metabolize drugs reducing the dose that reaches the target tissue. The microbiome in PDAC has also become a focus of research. In mouse studies, cancers in mice that had received faecal transplants from humans with long-term PDAC survival did better than mice with transplants from short-term survivors.

CAR-T cells and the newly emerging CAR-M cells may also offer prospects of effective treatment for PDAC. CAR-T cells work by equipping T cells with a more effective tumour targeting mechanism. Their therapeutic success has been restricted to leukaemia. In solid tumours, challenges with antigen recognition, trafficking into the tumour and survival in the tumour have limited their utility. The challenge with trafficking may be severe in PDAC. Strategies to improve access of T cells n combination with CAR-T therapy may be vital. CAR-T therapy also has issues with toxicity, notably cytokine release syndrome. Researchers are developing novel approaches, such as the UniCAR system, to allow CAR-T cells to be switched off if cytotoxic effects develop.