Home Blog A lot on the plate: high-throughput exosome isolation 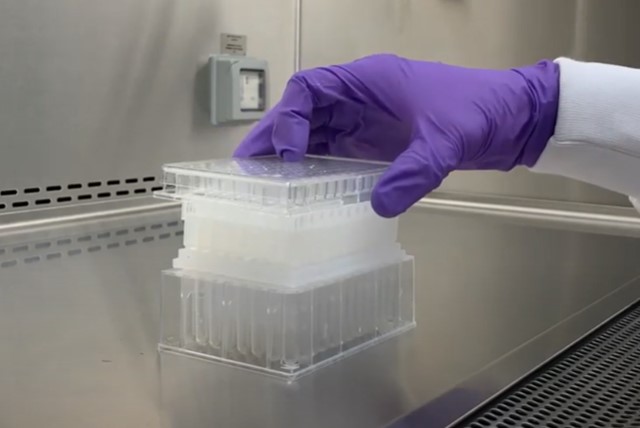 Exosomes, abundant in blood and other bodily fluids, have emerged as a powerful diagnostic tool to detect a variety of diseases. However, reliably isolating these 30-150 nm sized extracellular vesicles (EVs) from large numbers of patient samples has remained a major challenge.

Continued improvements in exosome isolation techniques have recently led to a new high-throughput isolation product that has overcome this hurdle. The Exo-spin™ 96 kit allows for 96 samples to be purified in parallel in a standard 96-well format in under 30 minutes.  The kit is modular, so as few as 8 samples can be purified each time.

Exosomes are bilipid layer vesicles that contain RNA, DNA, proteins and other signalling molecules. Studded with proteins on their surface, these EVs are an important means for cells to communicate in the body, over both short and long distances. EVs carry a fingerprint of the individual cell that produced them. Exosomes are therefore increasingly recognised as important beacons that can alert us to cellular abnormalities that occur in diseases as diverse as malignant tumours or neurodegenerative diseases including Parkinson’s disease.

The number of scientific papers and patient studies has risen exponentially over the past 15 years. A myriad of approaches has been developed to not only collect, isolate and characterize exosomes but also to attribute and correlate exosome-specific markers with disease.

Exosome research has already begun the transition from the lab to the clinic. However, for exosomes to be a useful diagnostic tool, a number of criteria need to be satisfied. These include a standardized collection of exosome material by minimally invasive liquid biopsies from easily accessible bodily fluids; consistent routine purification and reliable sample analysis quantifying markers for each disease.

The exosome field has made great strides in finding specific exosome markers for solid cancers such as prostate, ovarian, breast, pancreatic, colorectal, lung and melanoma. Small blood or urine samples provide more than enough exosomes to diagnose disease. And, thanks to efforts by the community to standardise techniques and methodologies for characterizing EVs (published periodically as a set of guidelines and recommendations in MISEV), sample analysis has become ever more robust and comparable between labs.

Diagnostics requires high throughput. In the last few years, instruments and methodologies have become available for rapidly analysing EVs using nanoscale flow cytometry or imaging flow cytometry. FDA certification will allow the clinical use of these techniques. However, the ability to isolate exosomes from large numbers of patent samples is currently still missing.

The most widely used technique that allows isolation of exosomes on a large scale is size exclusion chromatography (SEC). The clear advantages of the technique have led to rapidly-rising popularity. Purification is achieved as samples migrate through a bed of porous resin beads. Small components of the sample, such as free proteins, are trapped within nanoscale pores in the surface of the beads. The larger exosomes pass the beads more quickly and are therefore separated from other sample components during migration, eluting from the column first. Since many SEC columns can be run in parallel, SEC has the potential to provide seamless compatibility with high-throughput downstream analysis methods.

However, a remaining issue has been column format. High throughput assays are typically performed in 96 or 384 wells. Cell Guidance Systems has recently introduced a novel SEC-based exosome isolation product in the standard 96-well format. Exo-spin™ 96, is the latest addition to a growing family of exosome products and is capable of isolating exosomes from 96 serum or plasma samples in under 30 minutes. Exo-spin™ 96 provides excellent reproducibility for both exosome yield and size distribution.

With a very low cost of isolation per sample and potential for robotic liquid handling automation, Exo-spin™ 96 has eliminated that last remaining bottleneck for high-throughput exosome isolation workflow.